The 2021 season once again featured only Joe Willis between the posts for Nashville SC. Like the 2020 campaign, Willis played every minute of Nashville’s season providing a steady presence in the back for the second-year club.

Willis finished in a three-way tie for most clean sheets, along with Carlos Coronel (RBNY) and William Yarbrough (COL). Willis also finished tied with these two keepers for the third best goals against per 90 minutes rate in the league, behind Andre Blake (PHI) and Stefan Frei (SEA). Willis also finished fifth in save percentage (76.4%). Based on this top-line success, Willis finished third in the voting for the goalkeeper of the year award.

While from a surface level it sounds like Joe Willis has a wildly successful season, things are not always black and white. There are shades of gray to Willis’ 2021 season as the underlying numbers were less kind to Willis.

Willis finished the 2021 season as only the 19th best MLS keeper in American Soccer Analysis’ Goals Added (g+) metric. The component numbers back the eye test with Willis. He received higher marks for his shot stopping ability, but fell below average in his ability to add value in passing, sweeping, and fielding the ball. Willis’ 2021 performance was a big drop off from his 2020 numbers. Last season, Willis finished second overall in g+, behind only New England’s Matt Turner.

At this point, most readers of my column should be familiar with Expected Goals (xG). It measures the likelihood that a shot will result in a goal using historical data based on a variety of factors such as distance and angle of the shot. An offshoot of this metric is Post-Shot Expected Goals (PSxG). Post-Shot xG takes into account the quality of the shot itself. Let’s illustrate the difference. If two shots are taken from the same spot and under the same conditions, they will yield the same xG. But if one shot dribbles harmlessly to the keeper and the other shot is a rocket to the upper 90, the second shot earns a much higher PSxG.

We can use PSxG versus the number of goals actually conceded to measure how effective a goalkeeper is at making saves that their peers may not have made. 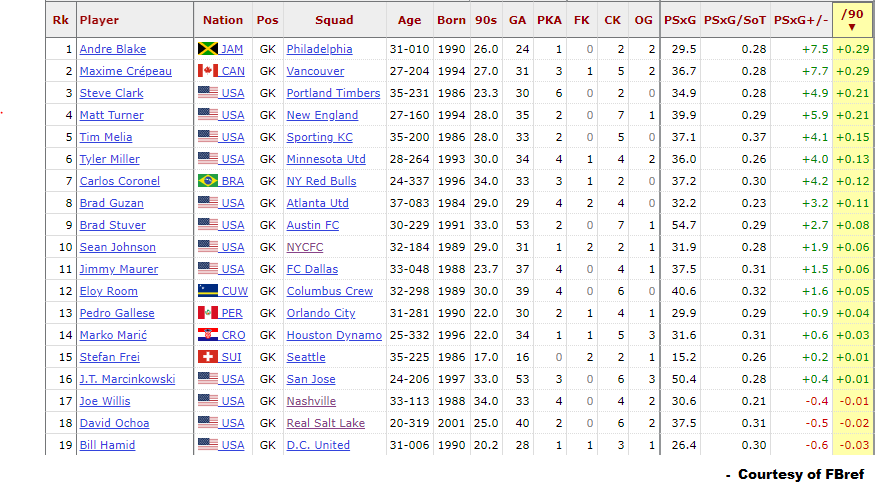 But all of these statistics should be understood within the context of Nashville SC’s salary budget. Willis is only the 20th highest paid goalkeeper in MLS with a guaranteed salary of just $316,250 per year. Given that Nashville is paying a below-average cost for a starting goalkeeper, Willis provides value in roster construction.

Willis remains under contract and will return as the presumptive starter in 2022. Nashville signed Willis to an extension this offseason, and his contract is guaranteed through the 2022 season with an additional option for 2023. The key moving forward is whether Willis returns to his 2020 form. If he bounces back in 2022, Nashville SC holds one of the most valuable starters in the league.

Bryan Meredith, 32, served as Nashville’s backup keeper in 2021. Meredith received no in-game action in 2021 after making three appearances for the Vancouver Whitecaps in 2020, but was on the bench for every match this season. Nashville hold a team option to extend Meredith’s contract for another season. Given Meredith’s modest salary ($87,375), I expect to see him back in Nashville as Willis’ backup for another year.

Elliot Panicco, 25, is Nashville’s developmental goalkeeper. Panicco was selected 13th overall by Nashville in the 2020 MLS SuperDraft. In 2021, Panicco was loaned out to USL Championship side Austin Bold. He made 28 starts for the Bold conceding just 0.95 goals per 90 minutes and posting a 75% save rate. According to American Soccer Analysis, Panicco’s Goals Added (g+) finished at -0.35, the 22nd best mark in the league.

Like most MLS draftees, Panicco was likely signed to a guaranteed one-year contract with a club option for up to three additional years. I expect Nashville to trigger a contract option, keep Panicco within the club, and find him regular minutes either within the incoming MLS Reserve League or through another loan in the USL Championship.

Tor Saunders, 23, was selected by Nashville in the 3rd round of the 2021 MLS SuperDraft. The Coastal Carolina product signed a first-team contract with the club in June following the conclusion of his final college soccer season. Saunders never featured for Nashville in 2021.

At this point, it is hard for anyone on the outside to predict what Nashville might do with Saunders. We have yet to see him at a professional level. This is an evaluation that Nashville’s technical staff will make based largely on having worked with him one-on-one in training since the summer.

One to keep an eye on

I would not be shocked if goalkeeper Brady Scott was picked up by Nashville SC. Scott was recently released by Austin FC.

Nashville signed Scott in August 2020 before seeing him depart to Austin a few months later via the 2020 Expansion Draft.

Scott is a former US Youth international and spent several years with FC Köln II in Germany. While on Austin FC’s books, Scott spent 2021 in Tennessee on loan for Memphis 901 FC. Scott made seven starts for Memphis conceding 1.43 goals per 90 minutes. Despite the goals conceded and limited action, Scott posted an impressive 1.53 Goals Added (g+), largely on the back of 2.21 g+ for shot stopping activities. On a per 96 minute basis, Scott’s shot stopping was 7th best in all of USL Championship for goalkeepers with at least 500 minutes of action.

At only 22 years old, Scott remains very young for a goalkeeper. If Nashville still believes in Scott’s overall talent, he may be worth a flier.