After a solid week against a weak Bears offense, the Titans defense got back to its old ways. Soft coverages. Awful run fits. You know the drill. However, despite the scoreboard, this wasn’t their worst performance. Short fields and a special teams touchdown really got things out of hand. This isn’t to be confused with praise. This defense is fundamentally broken at this point. But, Thursday night was a real team effort of suck on national television. An opportunity to yell from the mountain tops that they are worse than their record would suggest.

Of course, this isn’t a referendum on the Titans season. A lot of football remains to be played. However, it’s time this team does some serious self-scouting and reflection. To date, there appears to be very little of that. Personnel changes? Sure. Vic Beasley cut. Desmond King added. Breon Borders added. Those net to positive players on defense over their replacements. And, yet, at best this defense is stuck in idle, arguably worse.

As always, let’s look at the charting and see what we can learn from Thursday.

Coverages and 3rd/4th Down

A lot of man coverage in this game. Not completely unusual compared to weeks past. For the season, the go-to in passing situations has usually been Cover 1.

Another solid performance by the Titans on 3rd down. They only allowed 33% of 3rd downs to be converted (note one of those was a spiked ball). However, they allowed 60% (3 of 5) 4th downs to be converted. Still, if you looked at these stats alone, you’d assume this was at least a decent game for the defense. But, the combination of short fields, and explosive plays were too much for this unit to overcome.

And despite these encouraging stats above, I can’t help but come away from this film review with this horrible sense that the result could have been far worse.

Now, on to the snuff film, er, tape review.

At least, that’s how I feel this staff perceives it. The linebacker play in the run game this year has been mind-numbingly bad. The only linebacker that’s shown a propensity to fit the run correctly – David Long – can’t find his way to the field (especially true now that he’s in the COVID protocol). The play is so devoid of fundamentals that you’d expect to see at even just the college level. Guys are in wrong gaps. They aren’t scraping to fill gaps. And, they almost never shoot a gap correctly to make a play. Quite the opposite.

Rashaan Evans seems stuck in some never ending paradoxical loop where he vacillates between playing Russian roulette through gaps – recklessly attacking, without rhyme or reason – or playing a game of freeze tag – only one where he’s stuck in cement while he waits for the blocker to reach him. There’s nothing in between. No calculated risks. No smart angles. Very few blocks shed. And, he’s a liability in coverage. I keep coming back to Office Space.

There is perhaps no better illustration of the dysfunction of the Titans run fits than the first two plays of the second Colts drive. 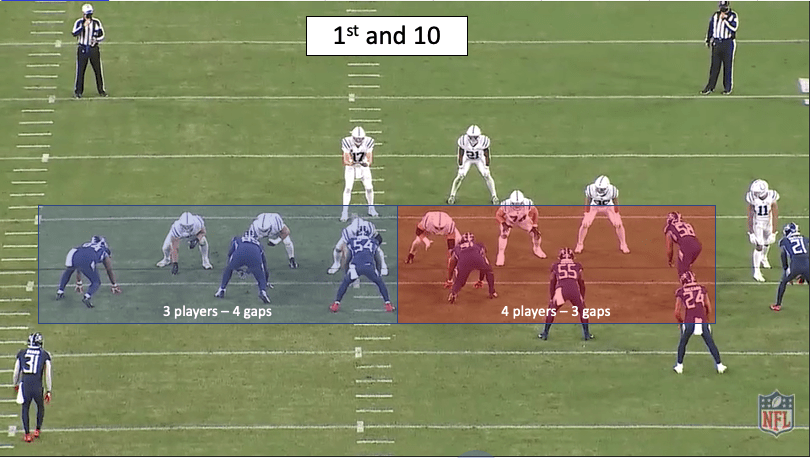 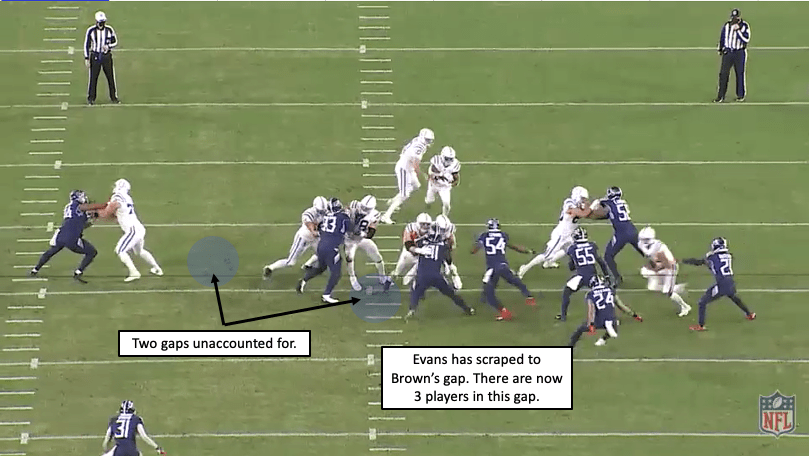 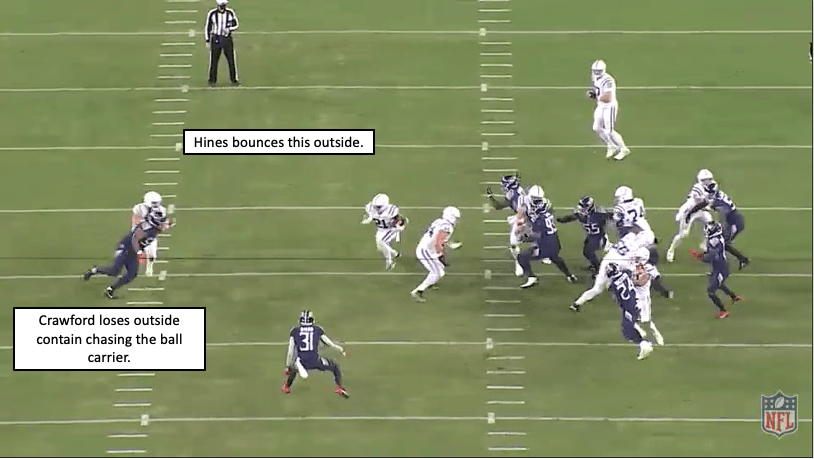 I don’t know what to make of such poor gap discipline. As I see it, there are two possible scenarios:

If I had to pick one of these, I think it’s probably number 1. I’m given a little pause because of how decisive Evans is in vacating his primary gap, but it could be he’s just following the ball. Not that it matters. It’s all rotten. 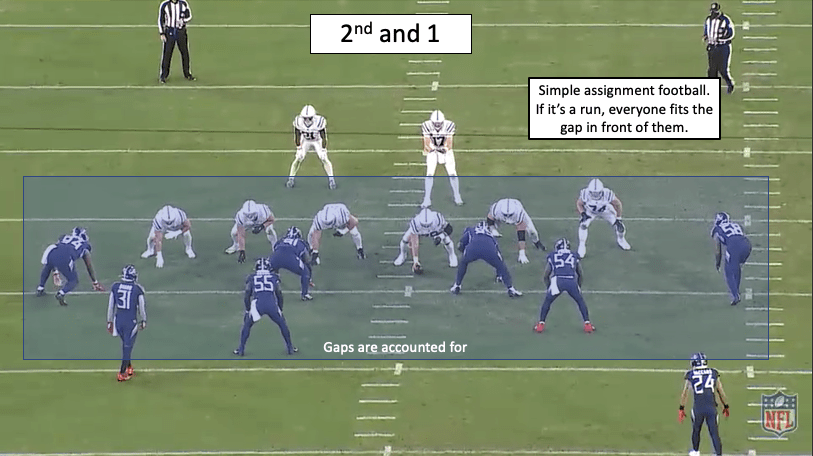 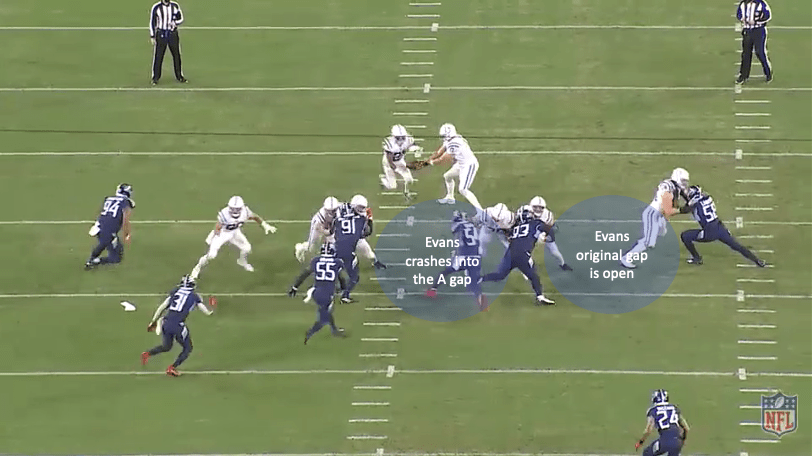 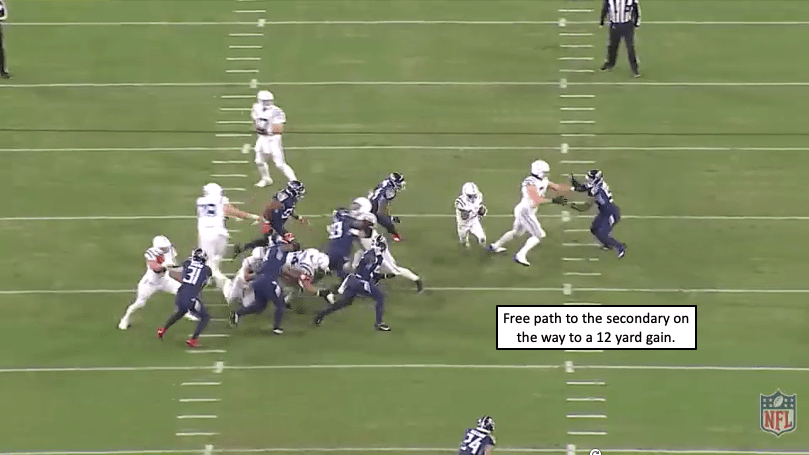 Author: Bill OttFilm nerd. Relentless defender of Derrick Henry. A recovering Vince Young apologist. Bill has been a Titans fan since 2006. A former All-22 writer for Music City Miracles, he continues to try to educate himself and the Titans fan base. You can find him on Broadway Sports as a frequent contributor of all things film related.