A delegation of FIFA officials made their first official visit to Nashville as part of the selection process for 2026 FIFA World Cup host cities. Lead by Concacaf President and FIFA Vice President Victor Montagliani and FIFA Chief Tournaments & Events Officer Colin Smith, the delegation’s one-day stop in Music City is a crucial step in Nashville’s bid to host the 2026 World Cup.

“We are here to do our due diligence, not only with the stadium, but the city and all the things in between,” said Montagliani. “We will continue that this afternoon and later on this evening before we leave. But I think it’s important for us to acknowledge that the World Cup is the biggest event in the world. The World Cup will be a tremendous event, a tremendous platform, not only for the game itself, but also for a city and a state and a country. I think Nashville has put their best foot forward, of course, showing everybody everything it has and everything it can be. We look forward to continuing our due diligence and working with the great officials and team you have here assembled to see where we go when we finally make a decision.”

“The energy, the passion, the enthusiasm from Nashville has been evident since day one, and we’ve seen more of that today,” said Smith. “Basically what we’re looking at is all the components that go into being a host city of a FIFA World Cup. It is the biggest sporting event in the world, and what we want to do is deliver magical experiences on and off the pitch… Cities and stadiums have become more and integral partners of being able to successfully deliver a World Cup. It’s been great to hear about the plans this morning. We look forward to visiting the stadium this afternoon and completing the tour, and then looking at other venues with a view to making a final decision early next year.” 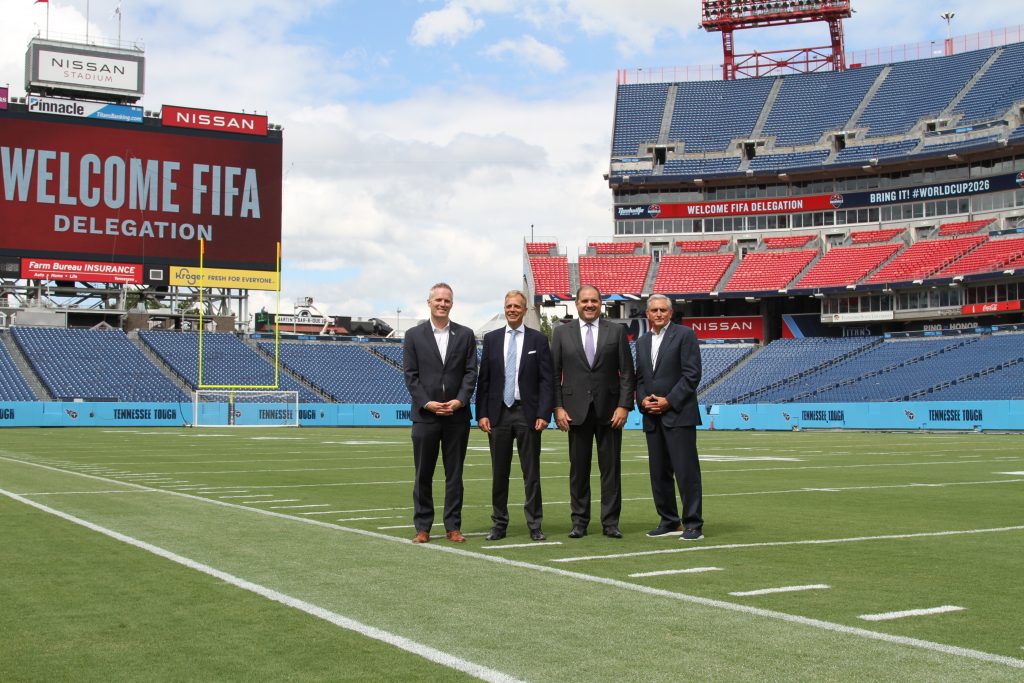 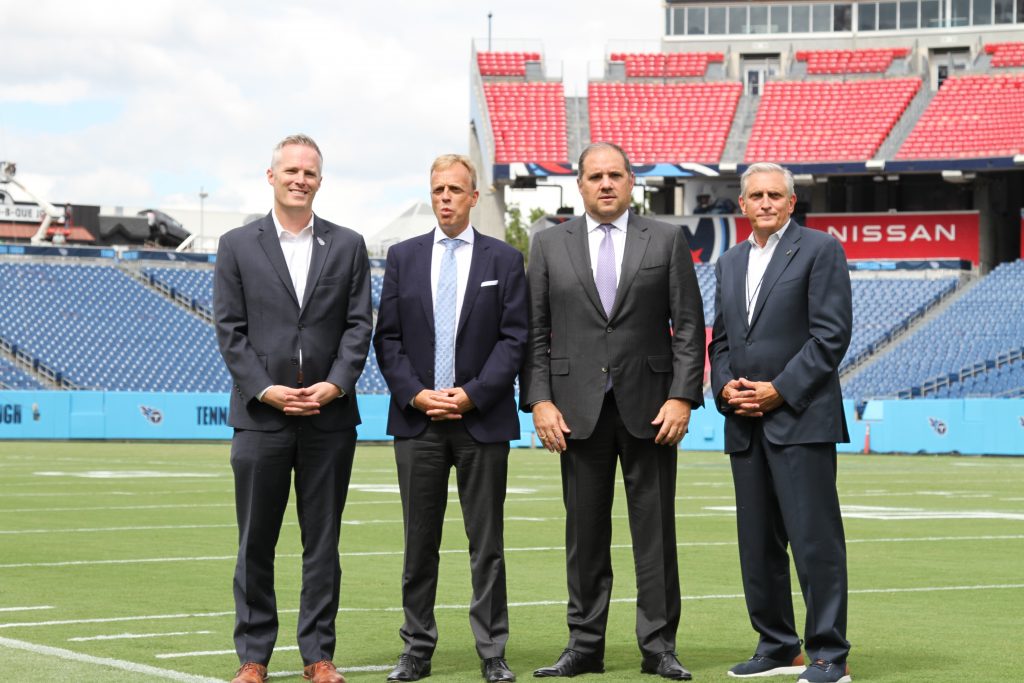 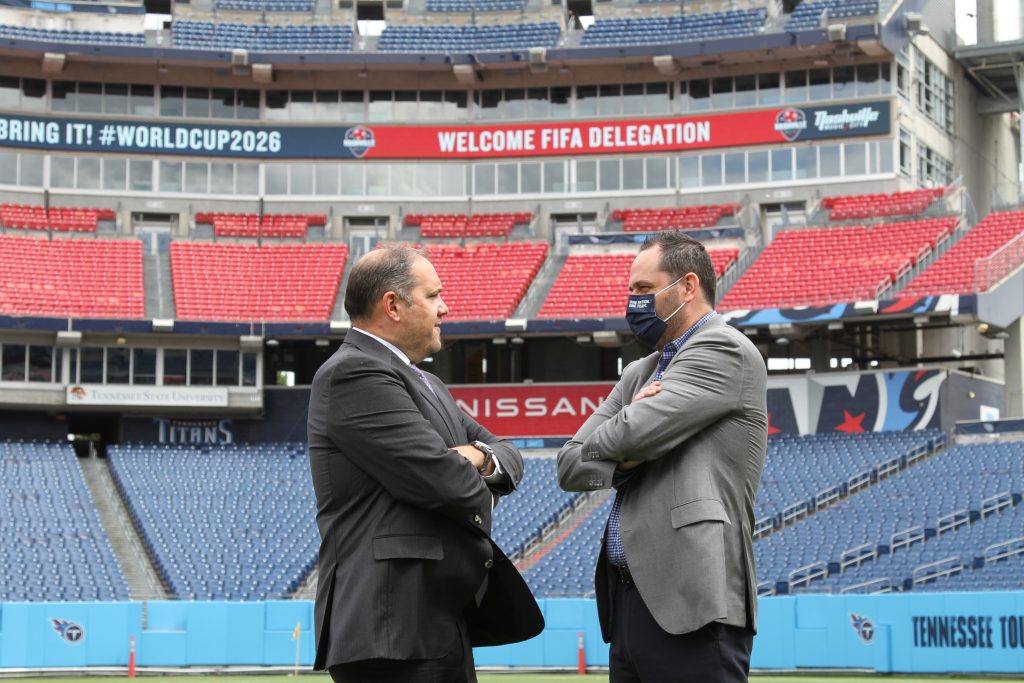 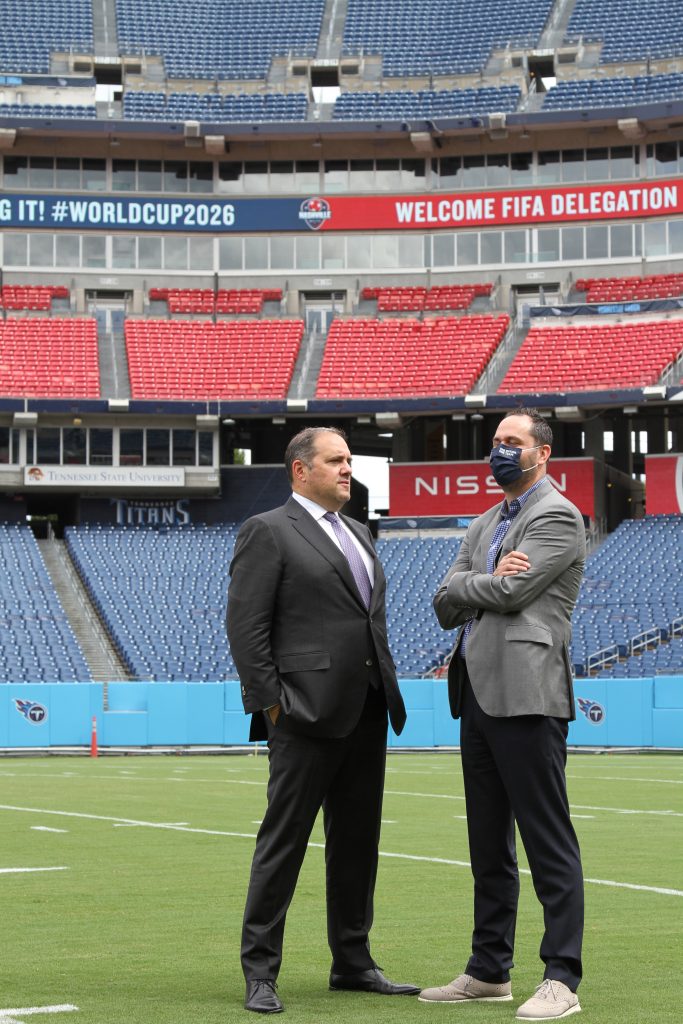 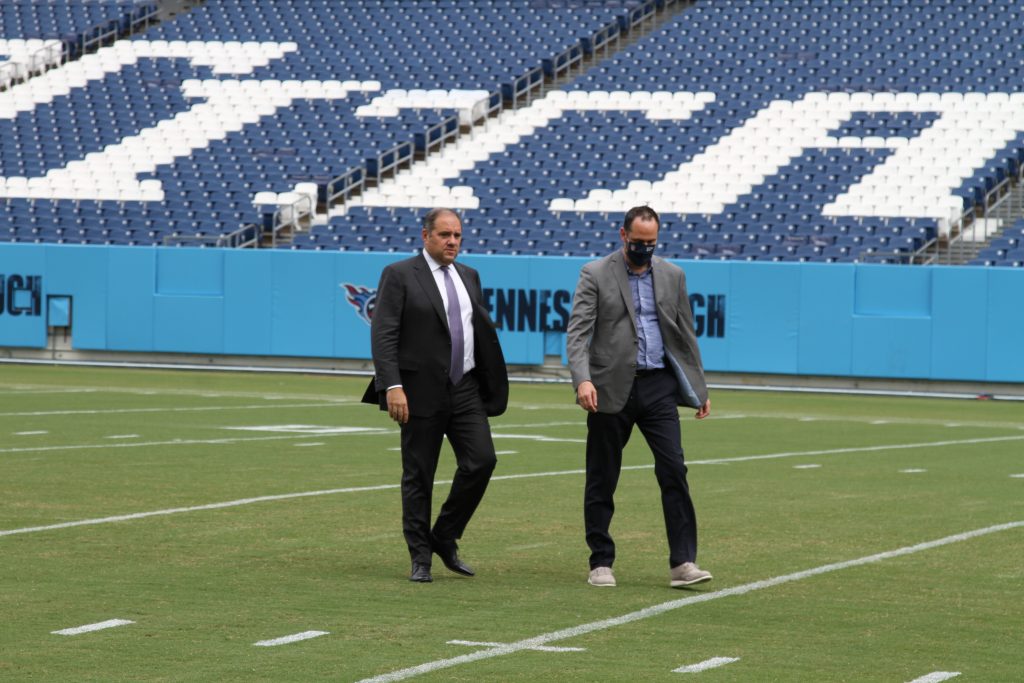 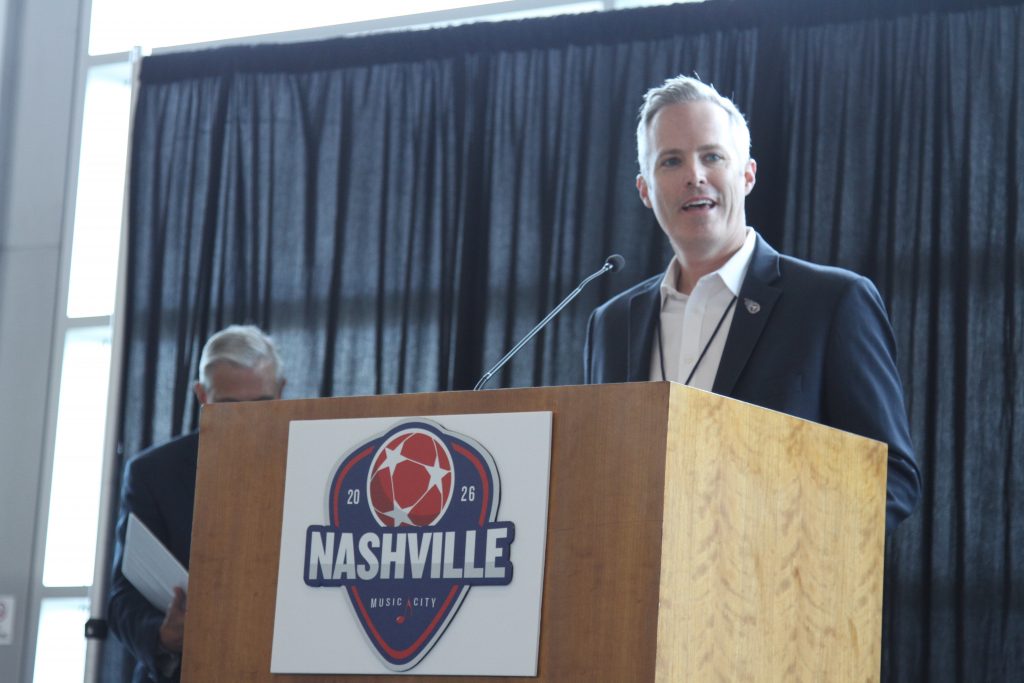 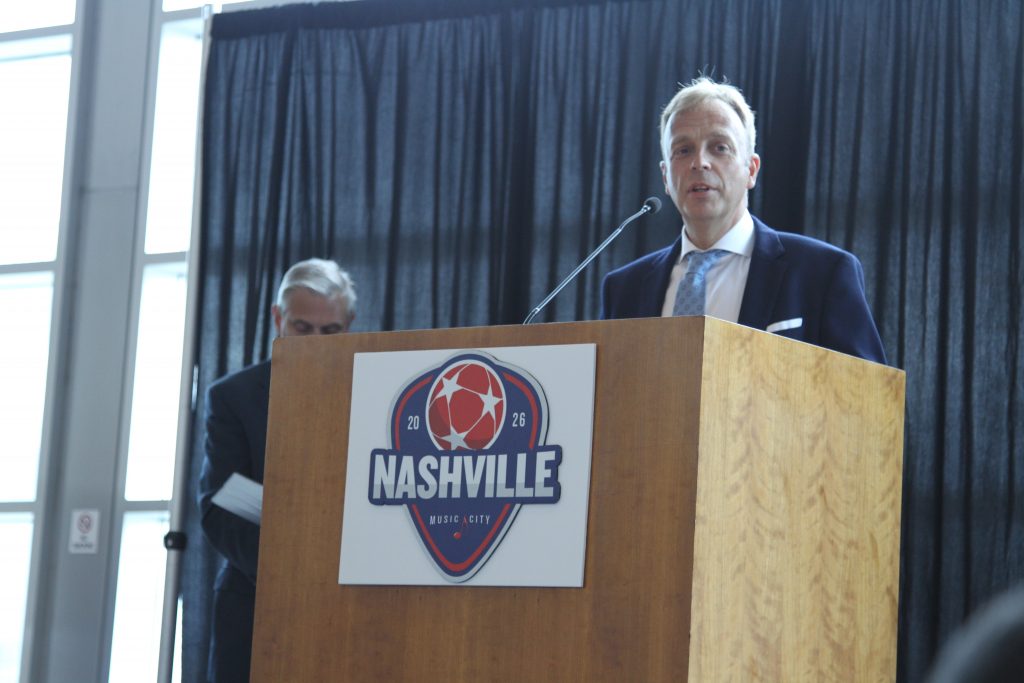 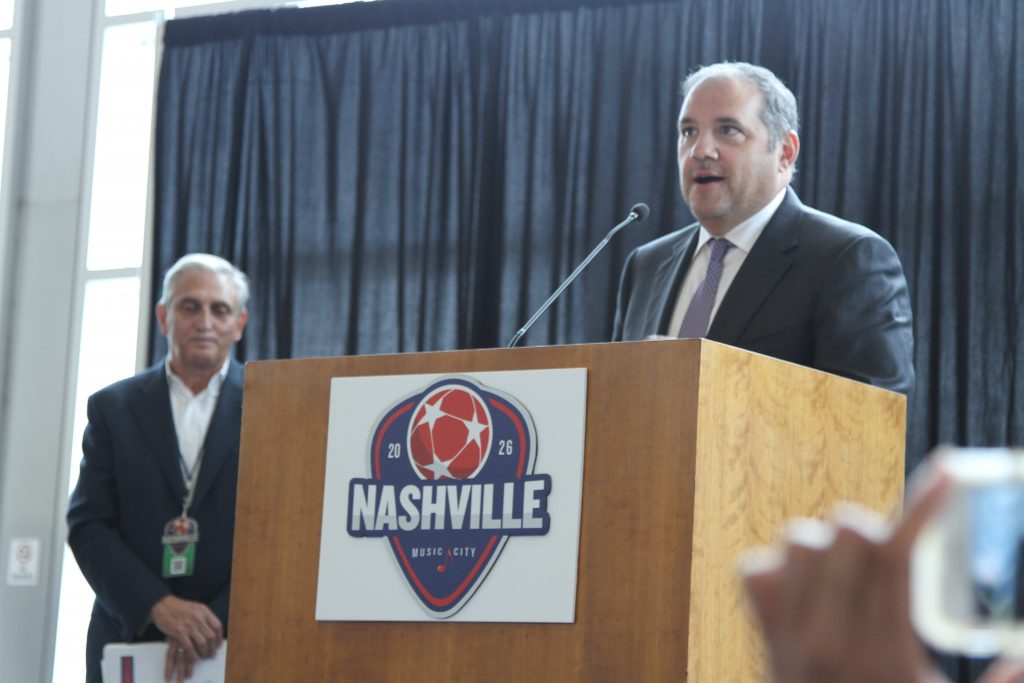 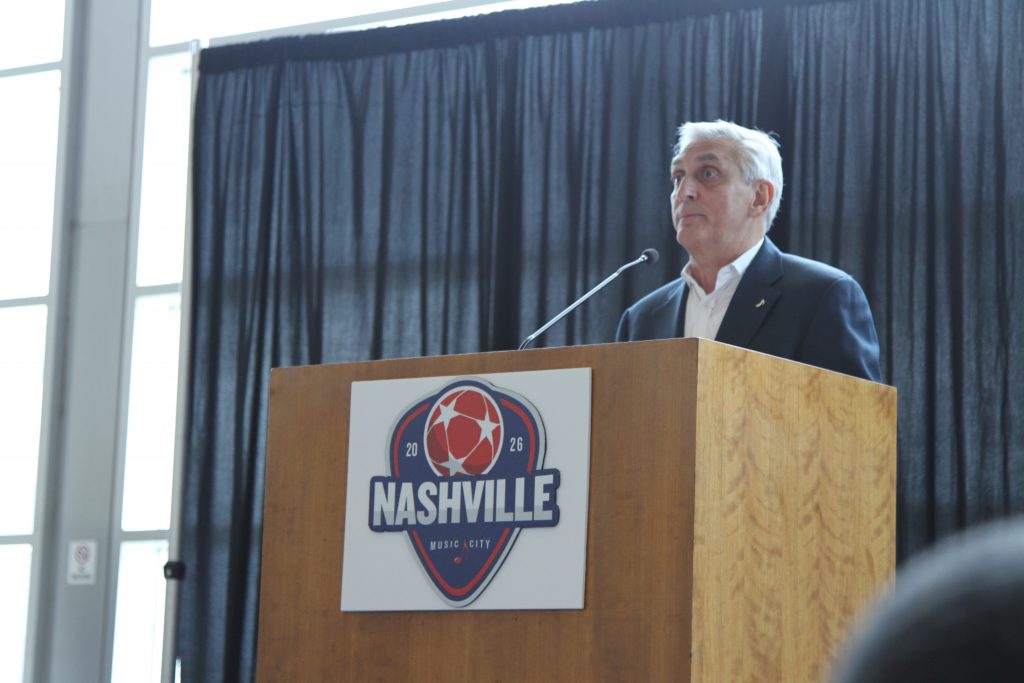 “We’ve been excited to participate in sharing with the FIFA delegation our vision for this stadium,” said Tennessee Titans President & CEO Burke Nihill. “To share our experience working with the Nashville CEC to do this sort of event, which Nashville in our minds does better than anyone else in the country.”

With the FIFA visit comes increased scrutiny into Nashville’s ability to host a massive event like a World Cup. While the 2019 NFL Draft was an unmitigated success for the city, the sheer scale of a World Cup is something the city hasn’t seen before. And the level of detail needed to successfully pull of a World Cup is intense.

“When we make our final decision and you go from candidate to host, everything comes into play,” said Montagliani. “It’s not just about stadiums and capacity, although that’s very important. It’s about everything. It’s a long list.”

“We’ve been working on this for years,” added Smith. “We’ve been spending a lot of time going through all the details. And without Covid, we would have been here and done multiple visits. This is the first time we’ve been able to come, so we’ve made the most of the time we have had. There’s been regular exchanges of information, and what the day visit in each city does is really give us the opportunity to verify and feel for ourselves the information that’s been presented.”

“Driving through lower Broadway on a Wednesday night, the presentations weren’t a lie,” he added with a laugh. “It’s a very vibrant city and there’s a lot of activity going on. What do we look for? We basically look for everything. Events of this scale, as many things do, boil down to the details. We look at everything from the stadium, training sites, accommodations, transport, sustainability, waste management, airport… it’s basically all the different pieces of the jigsaw. We’ve asked a lot of questions. We’ll ask more questions. And there will be subsequent follow-up between now and the final decision. We always wish we could spend more time, but it’s certainly been a very in-depth process.”

As far as what the details needed for pulling off a major event like the World Cup, Smith said the city itself is becoming an increasingly important factor in the event.

“No longer is it a location which happens to have a stadium,” he said. “We need to partner with cities, with stadiums and venues, in order to successfully deliver to all our stakeholders. Be it teams with basecamps, journalists coming in and out, be it hospitality guests, fans, sponsors… We’ve got such a wide range of people who come and experience a World Cup from different angles, and what we want to do is make sure that we cover all those angles so that everyone has those defining moments, those ‘I remember where I was when’ moments.”

Smith pointed to Nashville’s growth and ability to pull off major events like the NFL Draft and the Music City Grand Prix, as well as “the integration of all the city services”, as selling points for FIFA.

The journey to this point has been a long one for Nashville. The city has been in pursuit of a World Cup hosting slot since 2009, and have experienced monumental growth in the last five years. In addition to the Titans’ Burke Nihill and Nashville Convention & Visitors Corp CEO Butch Spyridon, they’ve added Nashville SC CEO Ian Ayre and Ryman Hospitality Chairman and CEO Colin Reed to their Local Organizing Committee, which will be headed by Nashville SC owner John Ingram. In addition to these major players in the local sports and entertainment landscape, Nashville Mayor John Cooper and Tennessee Governor Bill Lee also met with the delegation today and will continue to play crucial roles in the bid.

“There’s 23 cities that we need to see between now and the end of November,” said Montagliani. “That will all go to the steering committee of the World Cup, and those decisions will be made likely in early January.”

“Once you go from a candidate to a host, it’s a different ballgame altogether,” he warned. “If you think the detail and the rigorousness was tough as a candidate, it’s tougher as a host. But then it’s live. It’s not theory. Then it really ramps up. As much as we’re five years away from the World Cup, any of us who have put on an event know that five years goes by like that.”

Nashville faces steep competition to secure a final hosting spot. Of 17 cities still in the running, only 11 will be chosen. Nashville has to compete with the likes of New York, Los Angeles, Miami, Atlanta, Houston, Dallas and the majority of America’s most prominent metropolitan areas for the right to host World Cup games.

“It’s not a binary question. It’s not yes or no,” admitted Montagliani. “Every candidate city that has put their foot forward has features that they’re going to bring to the table. It’s not that easy of a question in terms of yes or no. In some ways, I wish we could say yes to all the cities, but then we’d have to have a 96 team World Cup, and we’ve had enough trouble with 48!”