Nashville SC earned their first home win at the GEODIS Park with a 2-0 victory over Real Salt Lake. Here are my three thoughts following the match.

The 2-0 win came in a dominating fashion for the Coyotes, even if the scoreline did not always reflect it. Nashville controlled the match from the start and never relinquished its stranglehold on the proceedings. 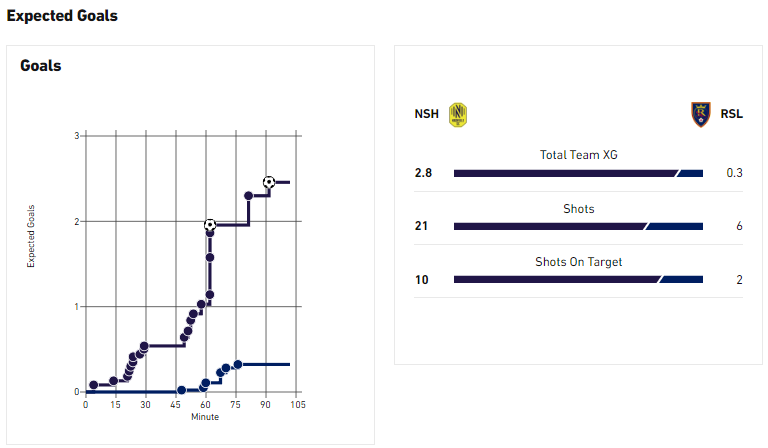 After weathering the initial onslaught, Real Salt Lake certainly grew into the match. But the possession RSL did generate never tested Joe Willis. At times in the late first half, it felt like the Coyotes were rolling out their typical away-match playbook. An opponent may have control of the possession battle for stretches, but Nashville stayed organized and never let those moments turn into threatening chances inside the box. RSL only generated 105 touches in the attacking third, their second-lowest mark on the season, and 13 touches in Nashville’s penalty area, RSL’s third-lowest this season. 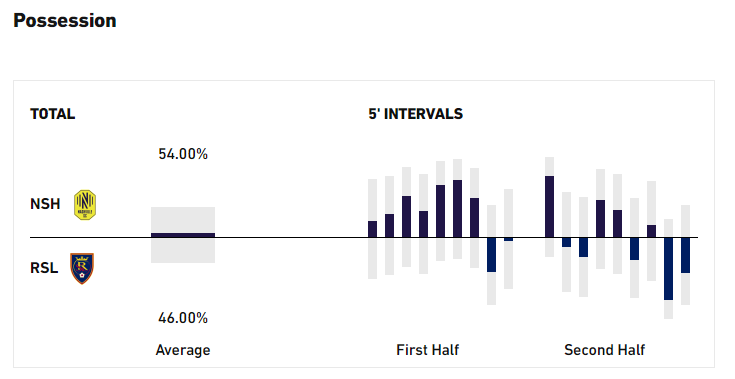 The only time RSL made the Nashville faithful worry was from a Justin Meram curler that found the top corner of the goal. A late whistle immediately called the goal off due to a foul by Meram in gaining possession from Dax McCarty.

Speaking of fouls, I thought Nashville generated a number of set-piece opportunities from dangerous positions. 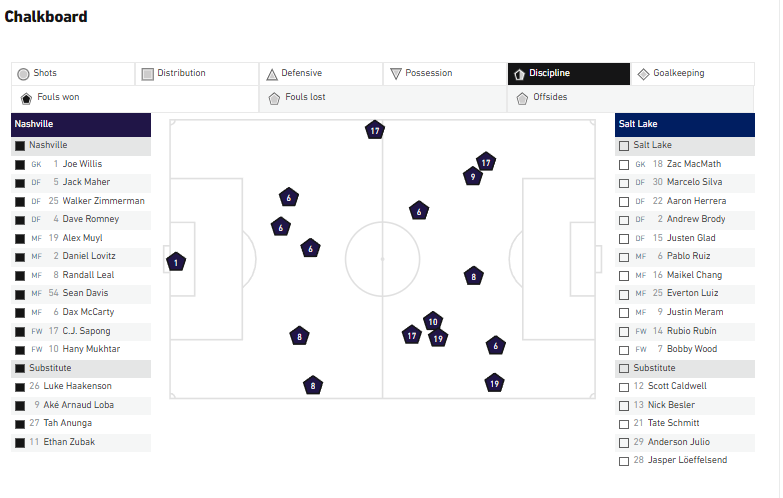 That line of fouls drawn from about 30 yards out gave Nashville plenty of chances to display its attacking set-piece prowess. It is no coincidence that the Coyotes’ opening goal came from a free kick awarded for one of these fouls in a dangerous area. The more of these opportunities Nashville can generate, the more Nashville’s floor will raise. Chipping in set-piece goals takes an enormous amount of pressure off of the attack in open play.

Aké Loba received an extended run out on Sunday with the forced substitution of Randall Leal at halftime. Loba flashed moments of danger but still failed to deliver the breakthrough performance that Nashville supporters crave.

Despite not finding the back of the net himself, Loba still made an impact on the match. It was his willingness to chase a loose pass and draw a foul that led to Nashville’s set-piece opportunity that created the Dave Romney goal.

Talent has never been the issue with Aké Loba. His goal-scoring record in LigaMX is proof enough of his ability. But due to a lack of consistent playing time, Loba has yet to click in Nashville.

For two weeks in a row, Loba has found himself in dangerous positions. However, Loba still lacks that little bit of chemistry and confidence to turn those opportunities into meaningful results.

Loba’s 72nd-minute chance is emblematic of his entire time in Nashville. Dax McCarty picks out Loba with a perfectly weighted ball. But Loba’s run is a half step too early and is eventually flagged offside. Even if the run had been well-timed, Loba failed to bury the shot. Chemisty and confidence, the two things missing from Loba’s game.

This week is a big one for Loba. If he is to break through into Nashville’s starting lineup, an unfortunate injury for Leal and a midweek U.S. Open Cup match present a golden opportunity for Loba to gain valuable minutes, establish chemistry, and gain confidence.

The field dimensions at GEODIS Park

On my rewatch of Sunday’s match, I learned an interesting tidbit about the field of GEODIS Park. Nashville’s excellent broadcast crew of Tony Husband and Jamie Watson mentioned that the field dimensions are currently set at 120 yards by 75 yards. It is the maximum width that the friendly confines of GEODIS Park will allow.

According to the published MLS Competition Guidelines, the league requires that all fields must conform to the following standard:

The match will be played on a field that remains the same size throughout the MLS Regular Season and Postseason, unless a change is approved by the League and the Visiting Team is notified at least seven days in advance of the match. The field dimensions and markings will conform to MLS standards and The International Football Association Board (The IFAB) Laws of the Game. No logos on the field, goal nets or corner flags will be allowed without prior written approval from the League Office.

The playing field will be at a minimum 70 yards wide by 110 yards long.

The league maximum field dimensions is not specifically stated. But the IFAB Laws of the Game dictate the following about field size:

The touchline must be longer than the goal line.

Competitions may determine the length of the goal line and touchline within the above dimensions.

While not the maximum allowable under the Laws of the Game, GEODIS Park is set larger than most. FIFA’s recommended pitch dimensions are 115 yards by 74 yards. GEODIS Park, at 120 yards by 75 yards, is both wider and longer than the standard field.

As mentioned by the broadcast crew, the width of the field certainly helps Nashville. Gary Smith’s preferred 3-4-1-2 formation stretches teams horizontally with three center backs and a pair of chalk-on-the boots wingbacks. Every inch of extra real estate gives additional room for Daniel Lovitz and Alex Muyl to operate.

The extra space vertically aids Nashville’s attackers. It is no secret that Nashville’s most dangerous moments from the run of play tend to happen through quick, counterattacking moves. Long fields, like GEODIS Park, create additional space between the opposition’s backline and goalkeeper. With the added real estate, there is more room to play between the lines and slip in balls behind the backline without getting gobbled up by the keeper.

Nashville certainly enjoyed a dominant 2-0 win over Real Salt Lake. But there is little time for celebration as the match calendar compresses this week. Atlanta comes to town on Wednesday for a U.S. Open Cup battle before the club travels to Houston on Saturday for a date with the Dynamo. It’s a big week for the club and several players as lineup rotation will need to occur with three matches in the span of six days.

Author: Chris IveyChris is a senior writer covering Nashville SC. His work includes his "Three Thoughts" piece after every Nashville match that highlights the important storylines and incorporates key video clips from the match. Chris' other articles often navigate the complexity of roster building around the myriad of MLS roster rules. Outside of Broadway Sports Media, Chris resides in Knoxville and is a licensed attorney serving as in-house counsel for a large insurance company. Beyond NSC, he is always willing to discuss Tennessee football and basketball, Manchester United, Coventry City, and USMNT. Follow Chris on Mastodon