Another full week of MLS action, and another edition of the power rankings to break things down. The league counted the midweek slate of games as a separate week, thus the combined edition.

The top two sides in the model went head to head on Sunday night, resulting in a new top side for the first time in 11 weeks. Let’s dive in.

These power rankings aren’t subjective, but use a stats-based model for each team to get a more in-depth look at where clubs actually stand. The model weighs points per game and strength of schedule heavily, and also factors in goal difference and expected goal difference to show not just how teams have done in the table, but how they’ve played on the field. If you’re interested in the methodology, the full model can be viewed here.

These power rankings aren’t an attempt to predict the final table, just to provide readers with a different angle from which to judge teams.

Seattle and Sporting KC went head to head on Sunday, with Sporting winning 3-1 away from home. They’ve been hot on Seattle’s trail for the last five weeks, and the victory pushes them ahead by 0.20 points. It’s the first time since Week 4 that anyone besides Seattle has occupied the top spot.

Real Salt Lake push up into the top 10 after a pair of solid performances, drawing LA Galaxy midweek and beating Colorado Rapids soundly on the weekend. They’ve been one of the more up-and-down sides in the league all year, though. It would be nice to see some consistency.

Minnesota United jump four spots into 11th after a dramatic win over Portland Timbers. They closed out last week with a win over Seattle, and seem like they’re finally finding form after an extremely disappointing start to the year.

LAFC are the big losers this week. After working their way back into the top 10, they lost to Portland and drew with Vancouver Whitecaps. While the Portland loss wasn’t catastrophic in the model, a home draw with a bottom-five Vancouver was enough to drop their score by nearly a full point.

FC Dallas got a four-spot jump, despite a midweek loss to Colorado. A 4-0 win over LA Galaxy improved both their points per game, goal difference, and strength of schedule, pushing them out of the 20s. They’ve been incredibly disappointing all season, but the emergence of Ricardo Pepi as a legitimately dangerous no. 9 should give their fans plenty of reason for optimism.

Nashville SC’s 7.45 rating is their highest of the year, boosted by a road draw against Columbus Crew and a comfortable 3-0 win over FC Cincinnati. Their total would have been good enough for second place just last week. However, NYCFC‘s 5-0 win over Orlando City improved their score by nearly a point and a half. The entire top four is separated by just 0.75 points, and a single result could flip the entire quartet.

These projections will change significantly over the course of the season as teams get larger sample sizes at home and on the road (Nashville, for example, have just played away three times this season). And they’re not a concrete attempt to predict the final table, but rather to show each team’s trajectory based on current form.

I received a couple very fair questions on Twitter regarding the discrepancy between the power rankings and the projections, which I answered here:

Basically, Nashville's away points per game is a very small sample size compared to all the other factors in the power rankings. But in the projections model, which only looks at PPG, it dings them significantly when you extrapolate it out over their remaining 13 games.

The power rankings are a much more wholistic look at a variety of factors outside of solely points earned, while the projections only look at how many points teams play in each match and assume they’ll earn the same amount of points throughout the season. The power rankings attempt to show how good each team actually is, while the projections show what they’re on track for at the current time. 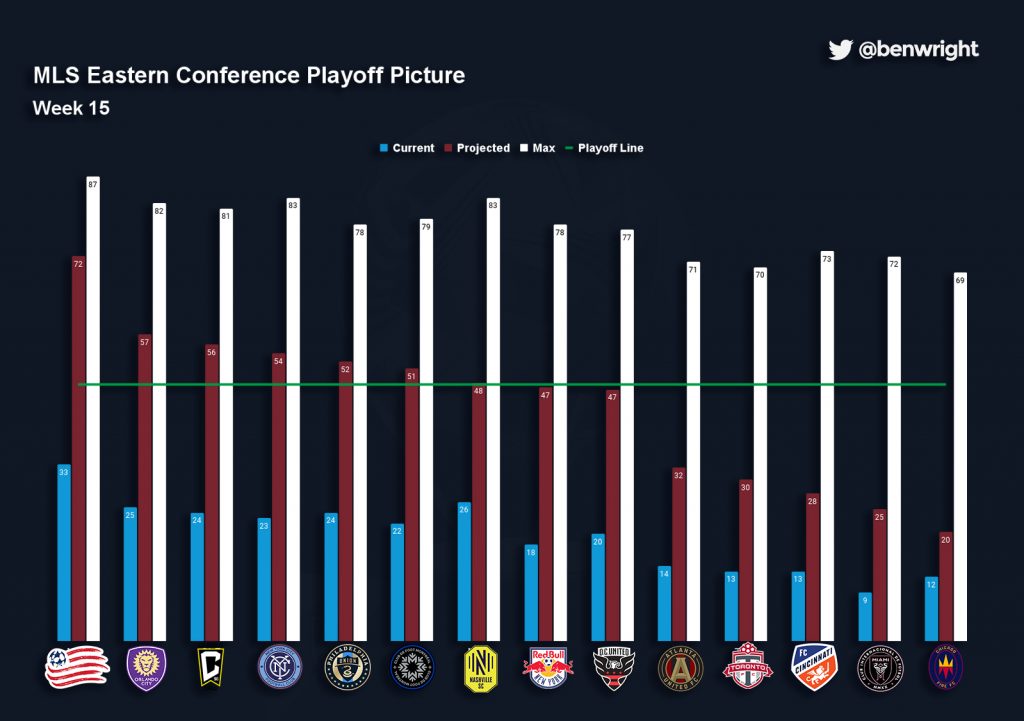 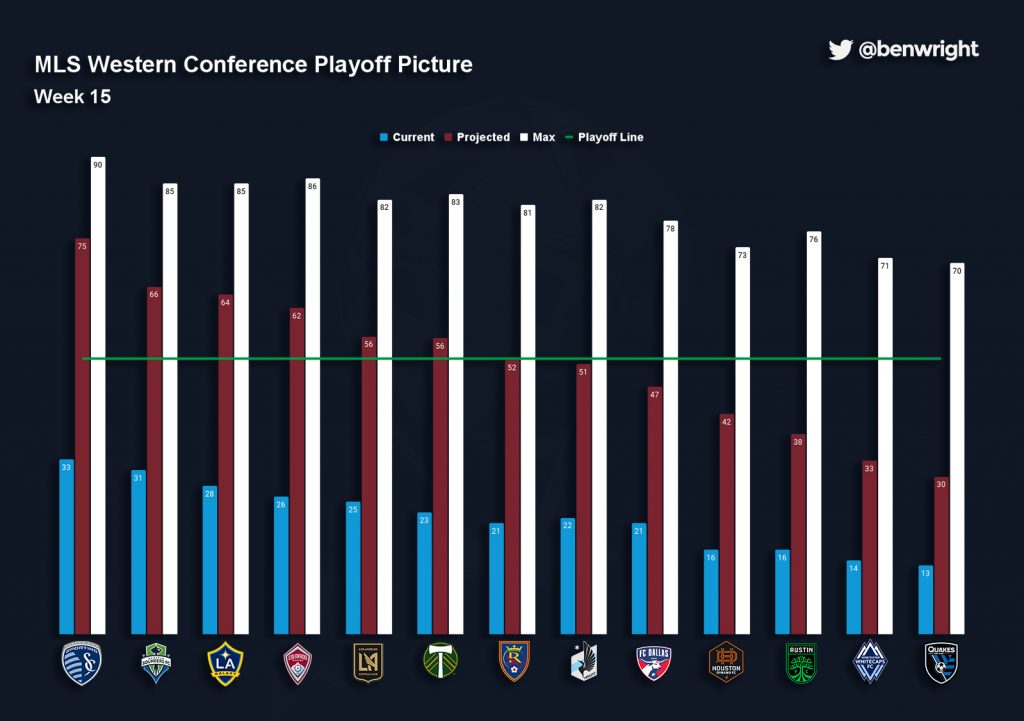 Nashville move into playoff position for the first time all year, in large part due to dropped points from New York. They’re still hampered by a 0.75 points per game average on the road, but they’ve only played four away matches.

The good news is they’ll have plenty of chances to improve that tally. The bad news is that unless they improve it quickly, they’ll start slipping down the table, and will have to fight for one of the final few playoff spots instead of looking for a home playoff match.

There’s still plenty of time. Don’t go looking for a panic button anytime soon. But Nashville absolutely have to find a way to translate their home form to the road. Sunday night in Toronto will be a difficult and telling test.