Scouting the Opponent is a weekly preview series looking ahead to the Titans upcoming matchup.

In a possible playoff preview, the Tennessee Titans (8-3) will host the Cleveland Browns (8-3) at Nissan Stadium on Sunday with a chance to secure their fifth consecutive season of nine or (hopefully) more wins.

The Browns and Titans are somewhat similar teams, but let’s see how they compare statistically through 11 games.

*DVOA is a Football Outsiders metric that stands for Defense-adjusted Value Over Average. DVOA accounts for a team’s opponents.

It’s not often the Titans lead their opponents in any defensive metric, but Tennessee is ahead of Cleveland in rush defense DVOA (and most offensive categories).

The Titans remain the NFL’s worst 3rd-down defense despite a strong showing last week, but the Browns are just 20th in 3rd down conversions on offense.

The Browns are also one of just two teams with a winning record and a negative point differential (Las Vegas, -27), which doesn’t really mean a whole lot but does suggest they may not be as strong as their 8-3 record.

Some key matchups that could shape the outcome of this game include:

Woods will move his dangerous defensive ends around the formation, but the key snaps will be when Vernon lines up across from Quessenberry. The extra attention is always going to follow Garrett, which means Quessenberry may be left on an island on occasion. He’ll need to be effective in those reps. Vernon hasn’t been super consistent this season, acquiring all five of his sacks in just two games, but that shows the kind of explosive effort he can turn in when he’s “on.” Vernon was the AFC’s Defensive Player of the Week after his three-sack explosion against the Eagles in Week 11.

After Odell Beckham, Jr. tore his ACL back in Week 7, many wondered how the Browns passing game would look without him. It took weeks to find out, as the Browns played in three straight bad-weather games with winds over 20mph, making it very difficult to throw.

Last week, the Browns traveled to Jacksonville, where it was a sunny 70 degrees, and Stefanski finally returned to the passing game, where Landry dominated the team’s target share. Of Mayfield’s 29 pass attempts, 11 were targeted at Landry (38%), along with eight of Mayfield’s 19 completions (42%) and 143 of his 258 passing yards (55%).

Landry has taken about half his snaps from the slot this season, which means he’ll likely see a lot of Desmond King on Sunday. The Titans should be prepared to chip Landry with their linebackers on underneath routes all day, but it could fall on King to limit Landry’s looks downfield.

Speaking of “Landry”s, the Titans have one of their own on the defensive side of the ball. Harold Landry routinely whipped Colts backup left tackle Le’Raven Clark last weekend, but Rivers continued getting rid of the ball quickly to neutralize Landry’s dominance. He finally broke through for a garbage time sack on Brissett in the closing minutes of the contest.

This week, Landry will see mostly rookie tackle Jedrick Wills Jr. when rushing off the edge (Landry was also used as a blitzer from depth four times last game, per Pro-Football-Reference’s tracking). Wills has really settled in over the Browns recent stretch, allowing hardly any pressures on his side. That is boosted by the Browns low passing volume over the past month, but even as a percentage Wills is performing at a high level.

In Week 10, Wills became the first offensive lineman to win the Pepsi NFL Rookie of the Week award since 2013. It won’t be an easy day for the Titans pass rusher even against an inexperienced player like Wills.

I saw this play from rookie wide receiver Collin Johnson (Hook Em) last week and thought to myself, “A.J. Brown is going to have a field day next week.”

It’s a classic Yankee concept – a staple of Jay Gruden’s offense, as well as Arthur Smith’s – with Mitchell responsible for Johnson on the deep over route, with Keelan Cole running the safety deep. Mitchell gives up all kinds of space to Johnson – check the All-22 still below – before Johnson turns the play upfield and races to the end zone.

Use the arrows to scroll through the gallery: 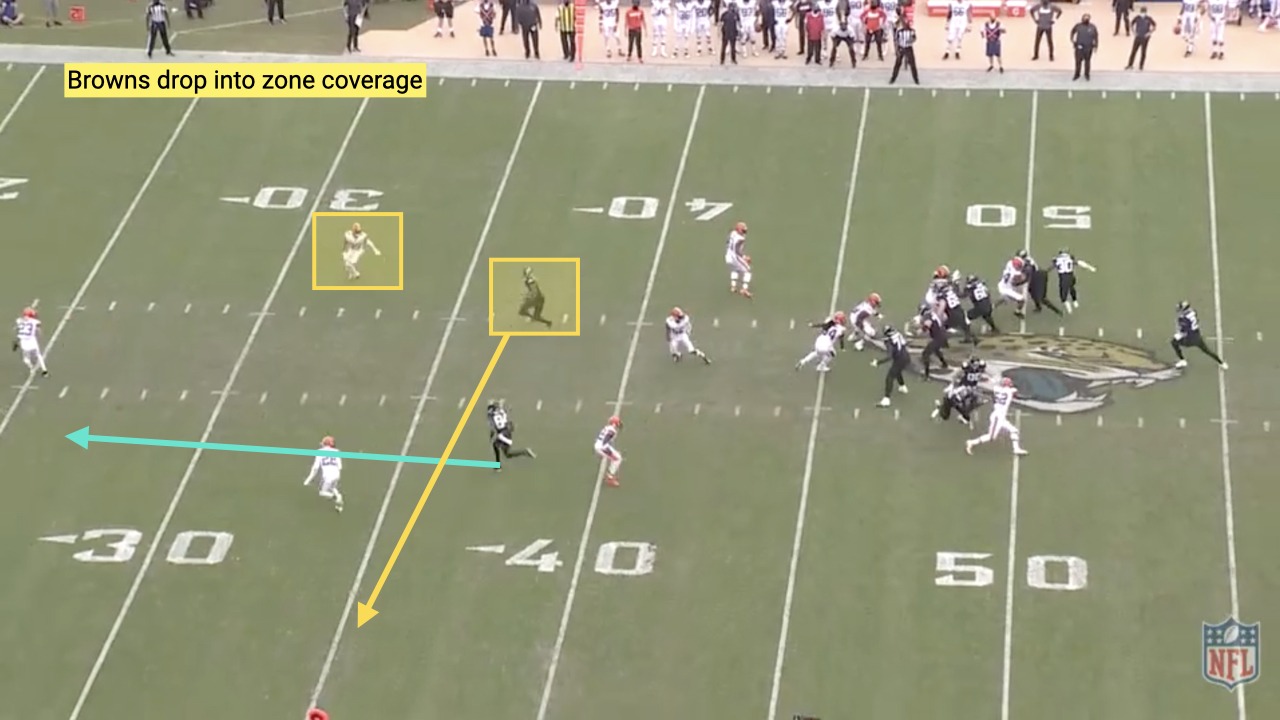 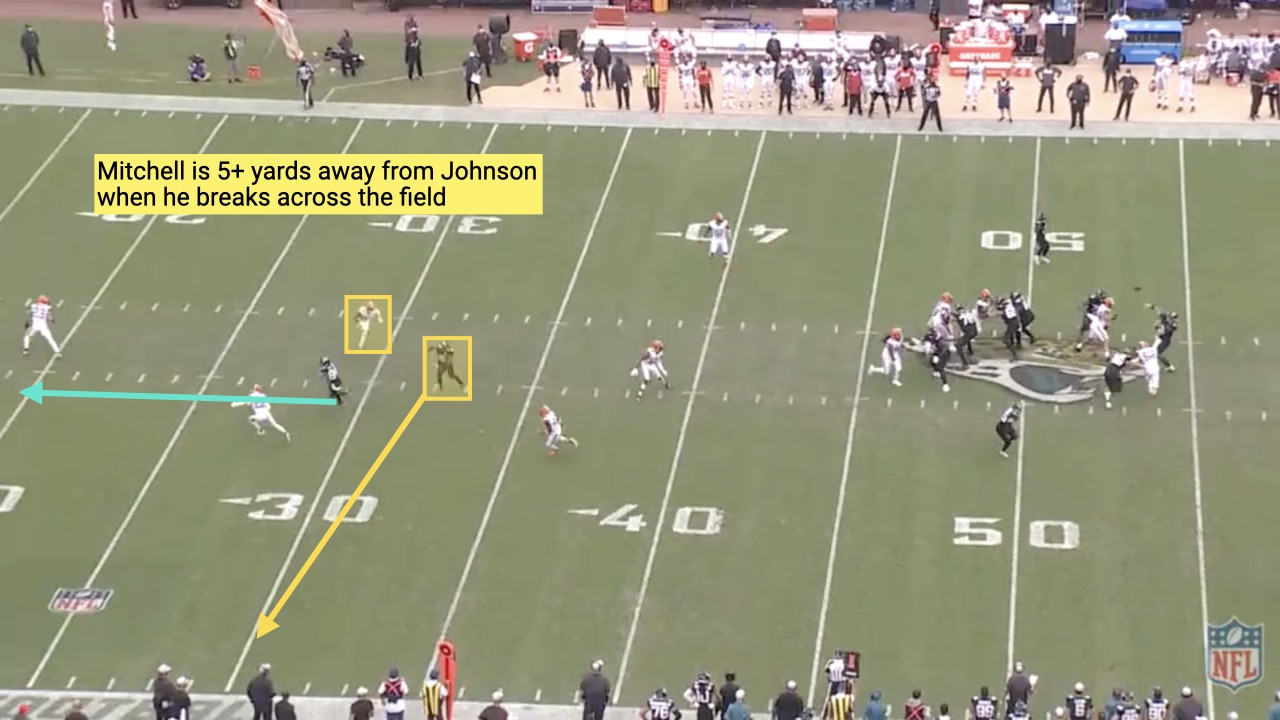 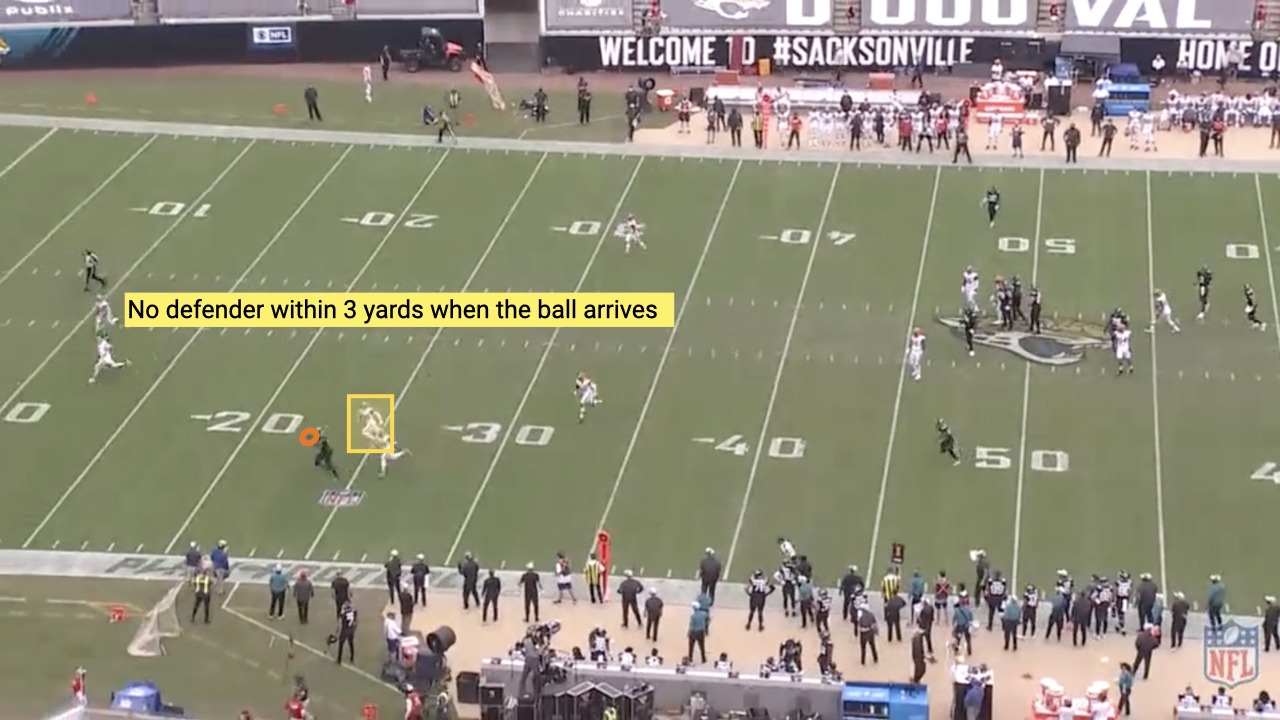