Scouting the Opponent is a weekly preview series looking ahead to the Titans upcoming matchup.

The Tennessee Titans (6-2) will host the Indianapolis Colts (5-3) on Thursday night. The winner will hold the first place position in the division.

These foes will meet twice over the next three weeks. If either team can pull off a sweep, they’ll be strongly positioned for a division title and the home playoff game that comes with it.

The statistical comparison between these teams looks a lot like last week’s. The Titans’ opponent is strong on defense but struggles to move the ball on offense.

*DVOA is a Football Outsiders metric that stands for Defense-adjusted Value Over Average. DVOA accounts for a team’s opponents.

The first numbers that jump out are the Colts’ outstanding defensive rankings. They are top-five or better in every defensive metric listed above except for third-down defense.

Like in any divisional contest, Titans fans are familiar with the opposing team’s leadership. Here’s a quick refresher…

Some key matchups that could shape the outcome of this game include:

The Colts added Xavier Rhodes over the offseason, and he’s been a stand-out player for a great secondary. The Colts run a lot of zone coverage, but the Titans have used Brown on the left side of the formation frequently, which is where Rhodes typically lines up.

Rhodes is currently PFF’s 4th-graded corner and was named to their midseason All-Pro team (as a second-teamer).

I don’t agree with Mike Clay that it was a “pretty inexplicable mistake” in a game where Corey Davis dominated and the Titans’ troubles had nothing to do with their offense, but regardless, Brown could see a lot of Rhodes in this game.

Another week, another key matchup involving Malcolm Butler. Butler has been shadowing the presumed “number one” receiver for each opponent over the past three games: Chase Claypool, A.J. Green, and most recently, Allen Robinson.

It’s unknown exactly who Butler will matchup with on Indianapolis, but given the speed mismatch presented by a now fully healthy T.Y. Hilton, I’d expect Butler to be on the bigger-bodied Pittman, who saw seven targets come his way last week against Baltimore.

This isn’t quite a literal matchup, but Leonard is a supremely talented linebacker who plays a large role in the Colts stout run defense. Leonard had 15 tackles against Baltimore last week while the defense limited the Ravens’ running backs to 53 rushing yards on 23 carries (2.3 YPC).

The Colts rank even better than the Bears at stopping the run, and Henry is coming off a 68-yard performance on 21 carries (3.2 YPC). Last year against Indianapolis, with Tannehill at quarterback, Henry ran for 149 yards on 26 carries (5.73 YPC) and a touchdown. A performance like that against this tough defense would go a long way towards securing a Titans win.

After taking a week off, Clowney is set to play against the Colts and their terrific offensive line. If there is a weak link in pass protection, it’s likely found on the right edge. Smith hasn’t allowed a sack this season, but he does lead the Colts in hurries (20) and pressures (21) allowed to go along with three penalties.

Clowney has played well and been disruptive, but he’s yet to live up to his expensive free agency price tag. If he wants the big pay day he’s looking for next offseason, he’ll need some stats to back up the contract. Hopefully the week of rest will help him get right for this game. Clowney has had some big primetime showings in his career — Week 10 last year against San Francisco comes to mind — and the Titans could certainly use a game-wrecking performance like that.

This is also not a direct one-on-one matchup, but rookie safety Julian Blackmon has been outstanding in the backend for the Colts defense, performing better even than the injured Malik Hooker. Blackmon appears poised to take over the long-term starter when Hooker leaves in free agency, having recorded 17 tackles, 6 passes defensed, and 2 interceptions in his seven career games.

Tannehill will need to be on point with his ball placement and decision making against the talented secondary of Indianapolis. He’ll need to be a bit sharper than he’s been the past couple of games.

Due to the NFL’s strict copyright policy which they have chosen to enforce against our website, I unfortunately will not be including any GIFs here. However, we’ve received clearance to use still images, which should help illustrate the concepts.

I will try to embed the plays I’m referencing where able or include links to view them on Twitter or YouTube. Alternatively, you could potentially look up the plays if you have a subscription to NFL Gamepass.

This section of the breakdown is not as robust as normal, as we are short on time with a Thursday game upcoming. For that reason, this article is not restricted to Broadway Pros this week.

The Colts defense is familiar with the Titans offense. In last year’s second matchup — again, with Tannehill at quarterback — the Titans put up 24 points on offense (with 7 more on a blocked field goal). I mentioned Henry’s excellent showing above. Tannehill was highly efficient that game but not remarkably productive, throwing for 182 yards on 17/22 passing with two touchdowns.

Tannehill also took six sacks in that game. The Titans will need to be good on early downs to avoid the third-and-longs that have forced three-and-outs in recent matches. Incompletions on first down followed by short runs on second down have plagued the offense of late.

By running the ball well on early downs, the Titans can set themselves up for success. This play from last year shows how the Titans were able to win the battle up front. 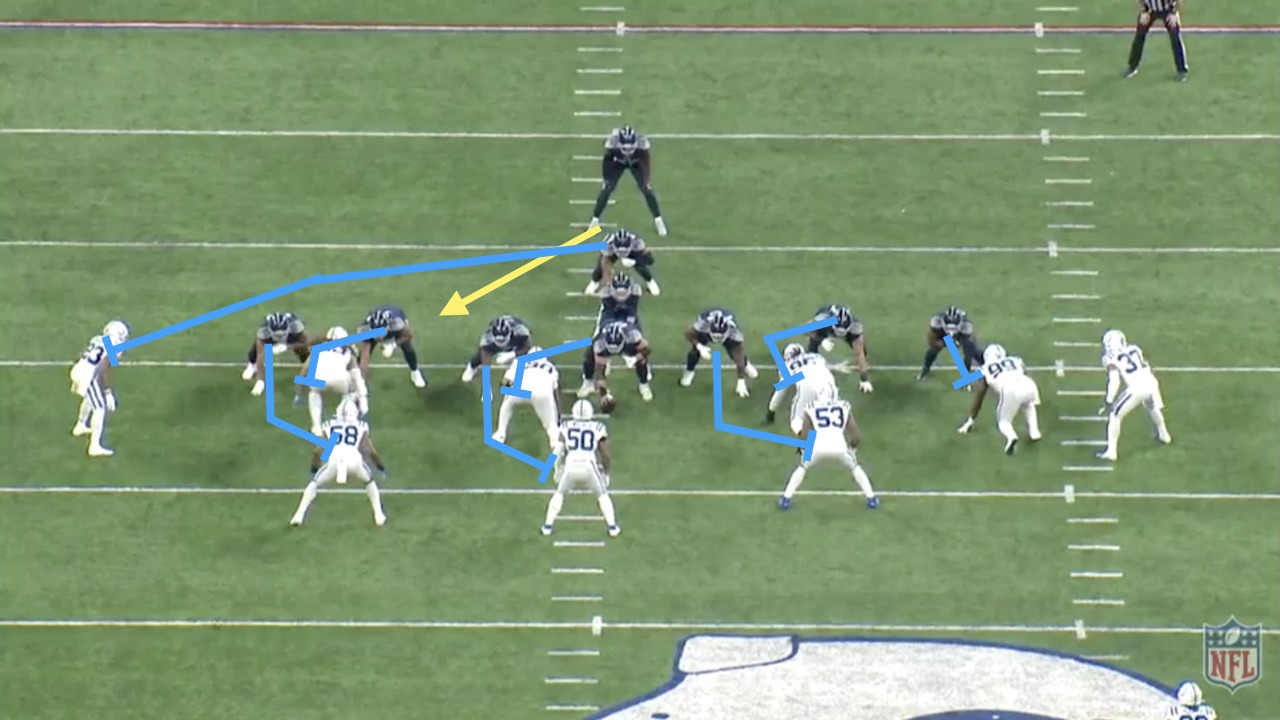 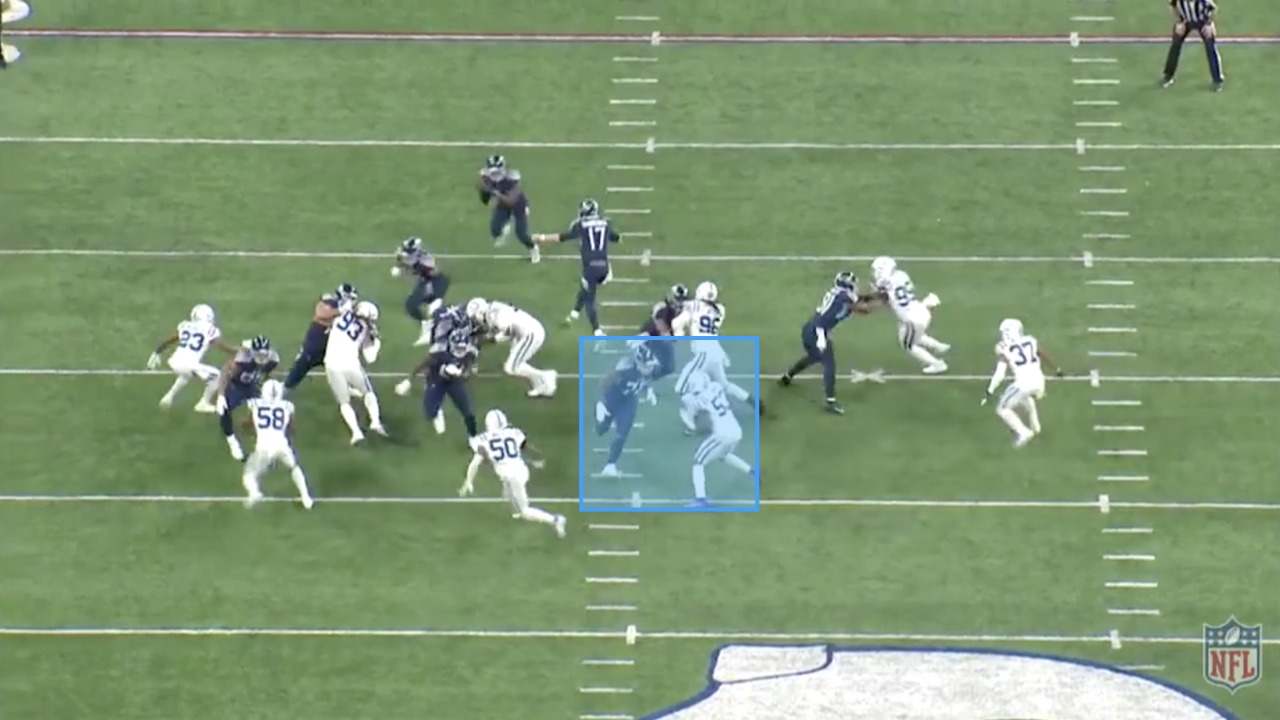 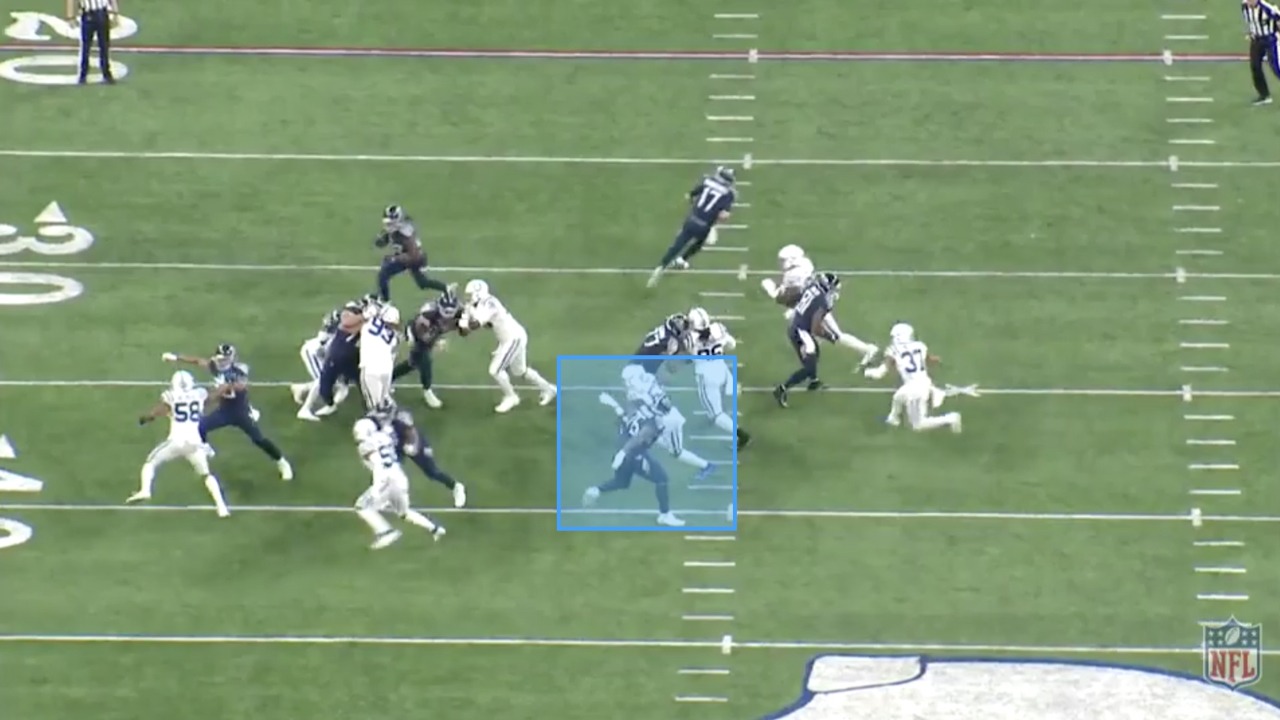 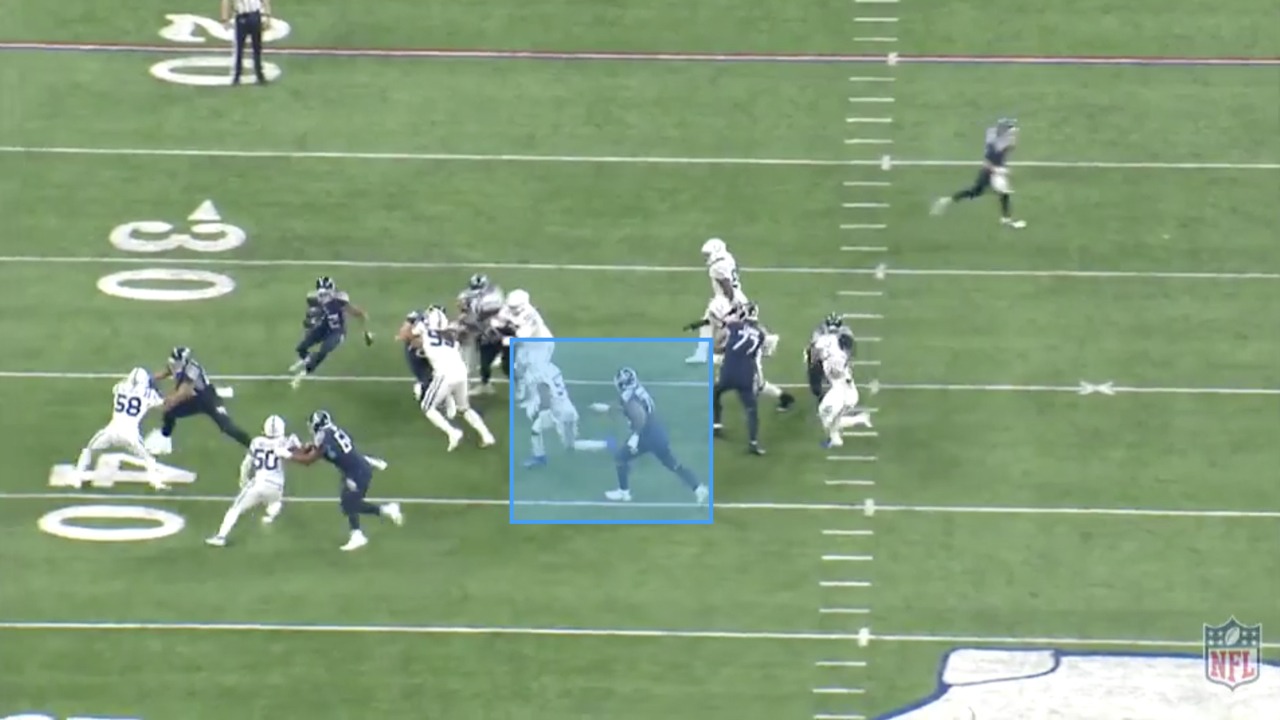 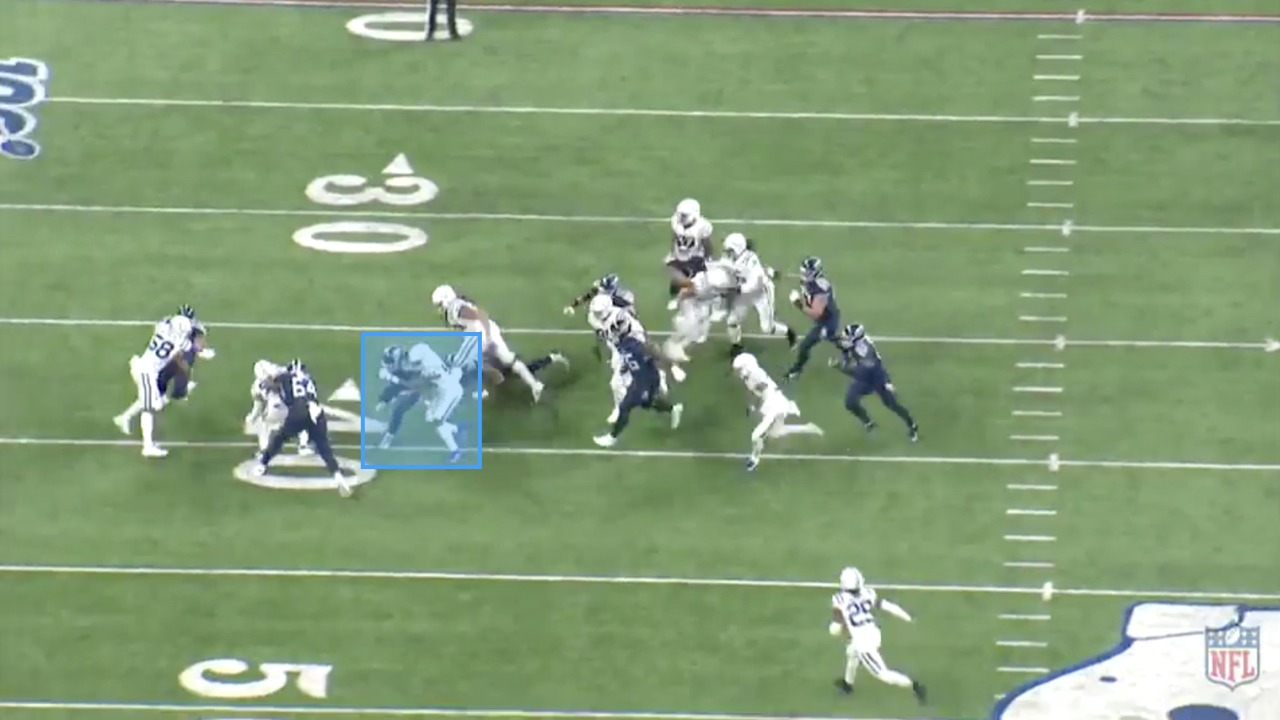 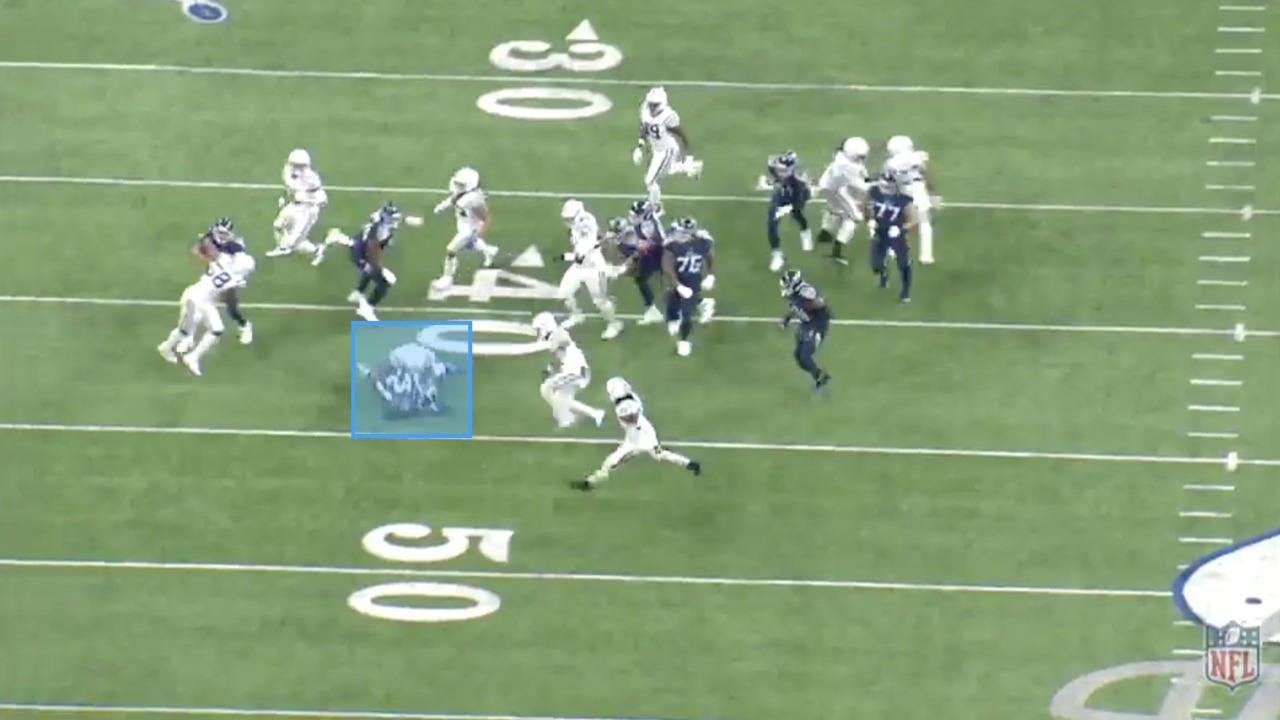 These are difficult reach blocks that are well executed by the Titans offensive linemen. If Rodger Saffold is able to lay a better block on Leonard in the second level, Henry may have turned this eight-yard gain into a house call. Still, you’ll take an eight-yard gain every time.

Granted, the Colts personnel is a bit better up front than they were last year. Acquiring DeForest Buckner via trade in the offseason added a powerful piece to their front seven. He’s Indianapolis’s highest-graded player on defense by PFF grades.

The Colts have yet to be beaten severely on the ground by any opponent this season. Even in their losses they’ve stymied their opponent’s run game while failing in other areas.

The Colts defense is allowing just 3.3 yards per carry, and opponents aren’t finding much more success through the air. Indianapolis is tied for the league lead with 11 interceptions, and only the Los Angeles Rams have allowed fewer touchdown passes than the Colts’ 10.

One area where the Titans can take advantage is with their heavy personnel groupings. According to Sharp Football Stats, the Colts defense is allowing 53% success to 12 personnel, by far the highest success rate allowed of any group that qualifies. Below is an example of the Ravens using matchups in their favor last week against Indianapolis. 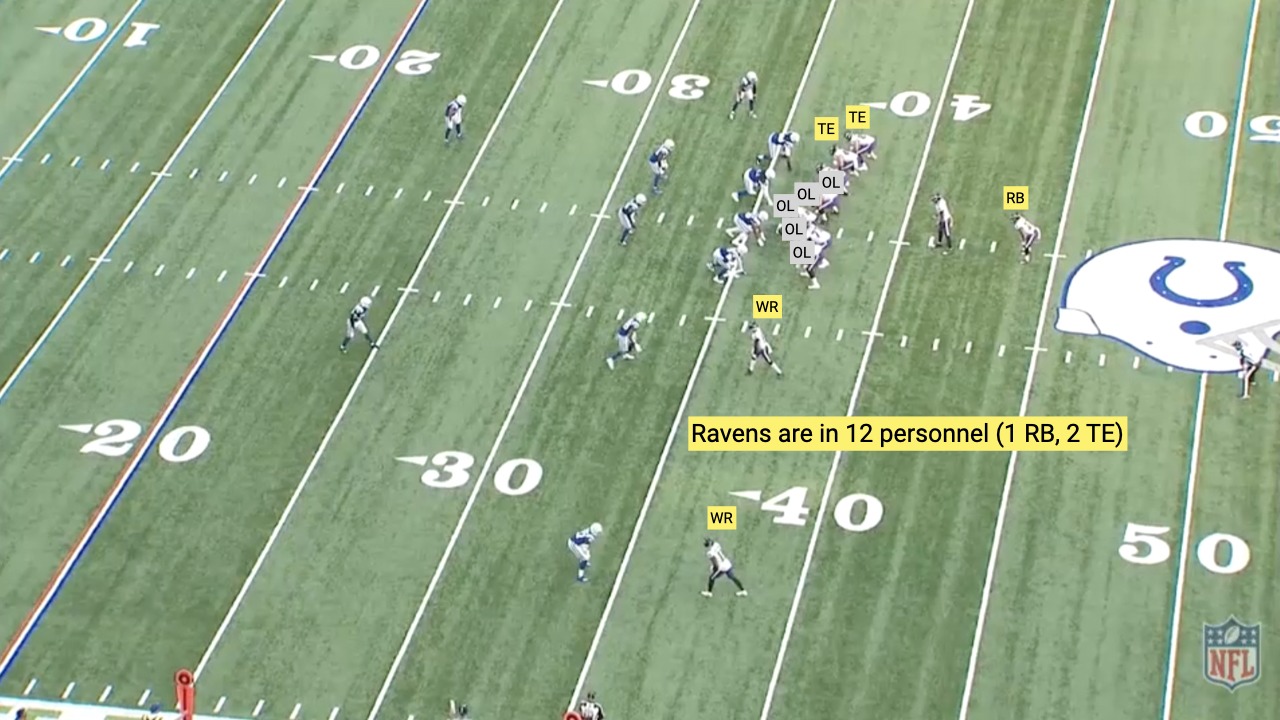 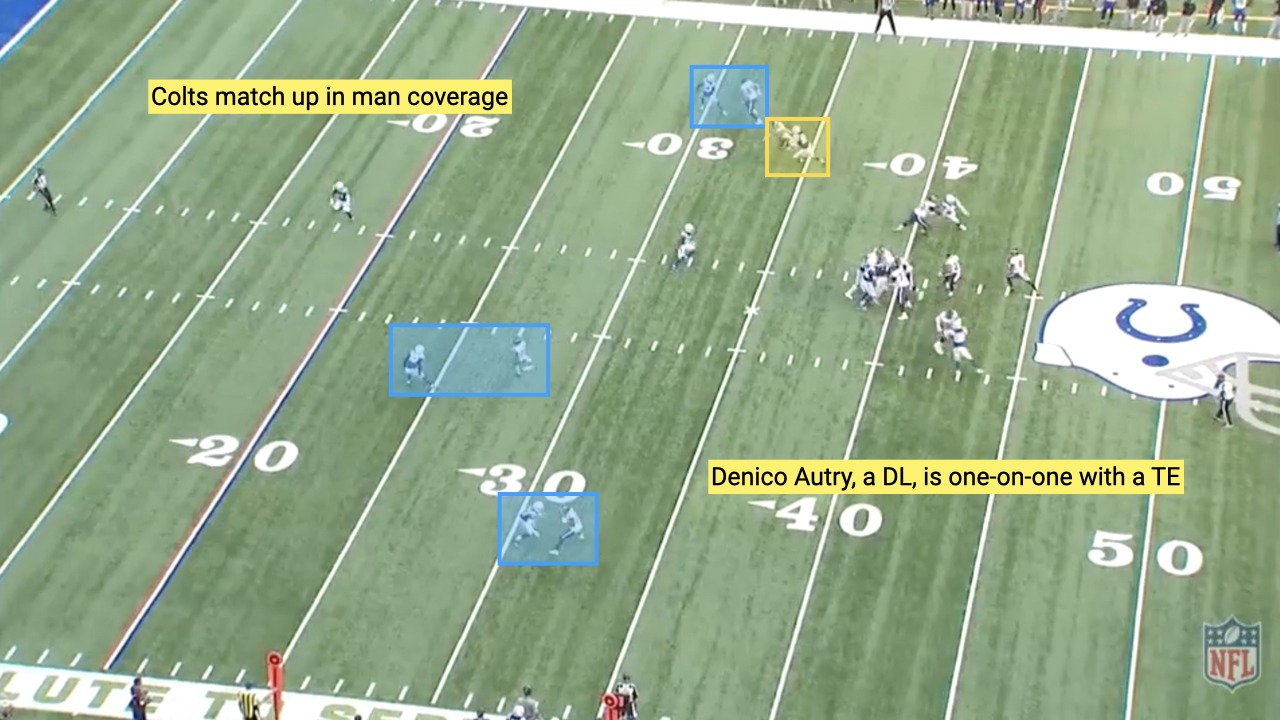 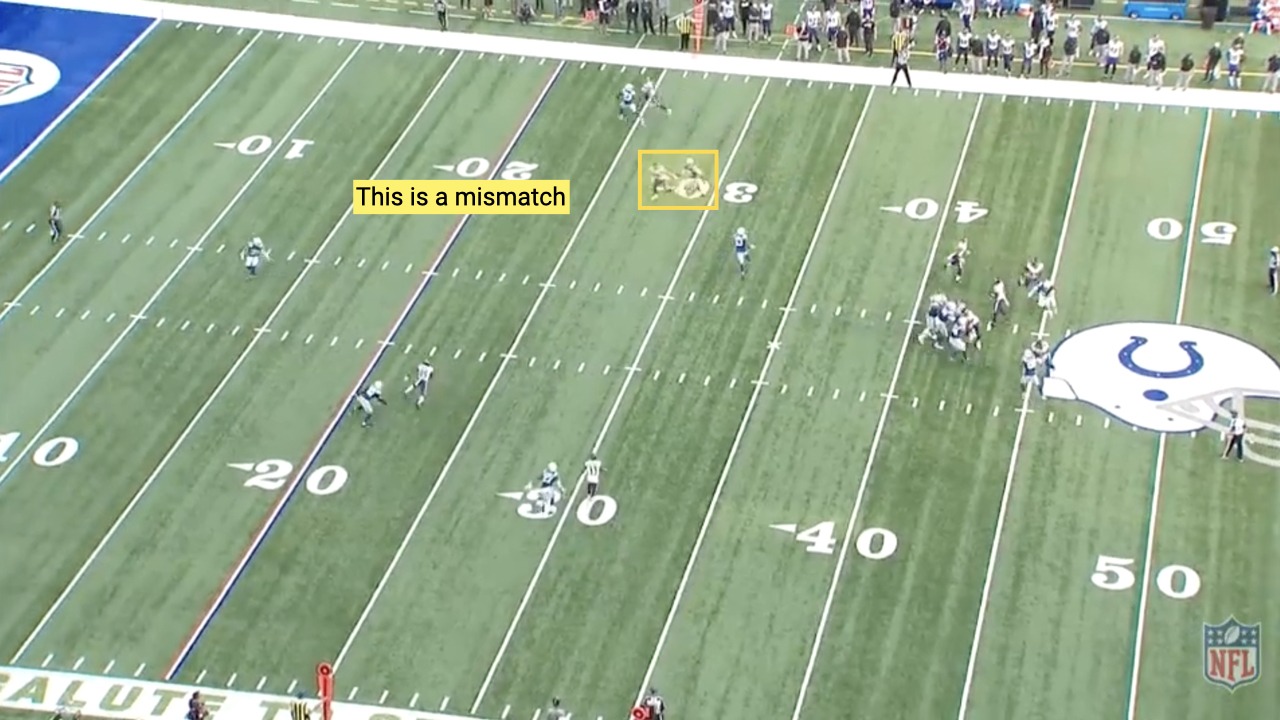 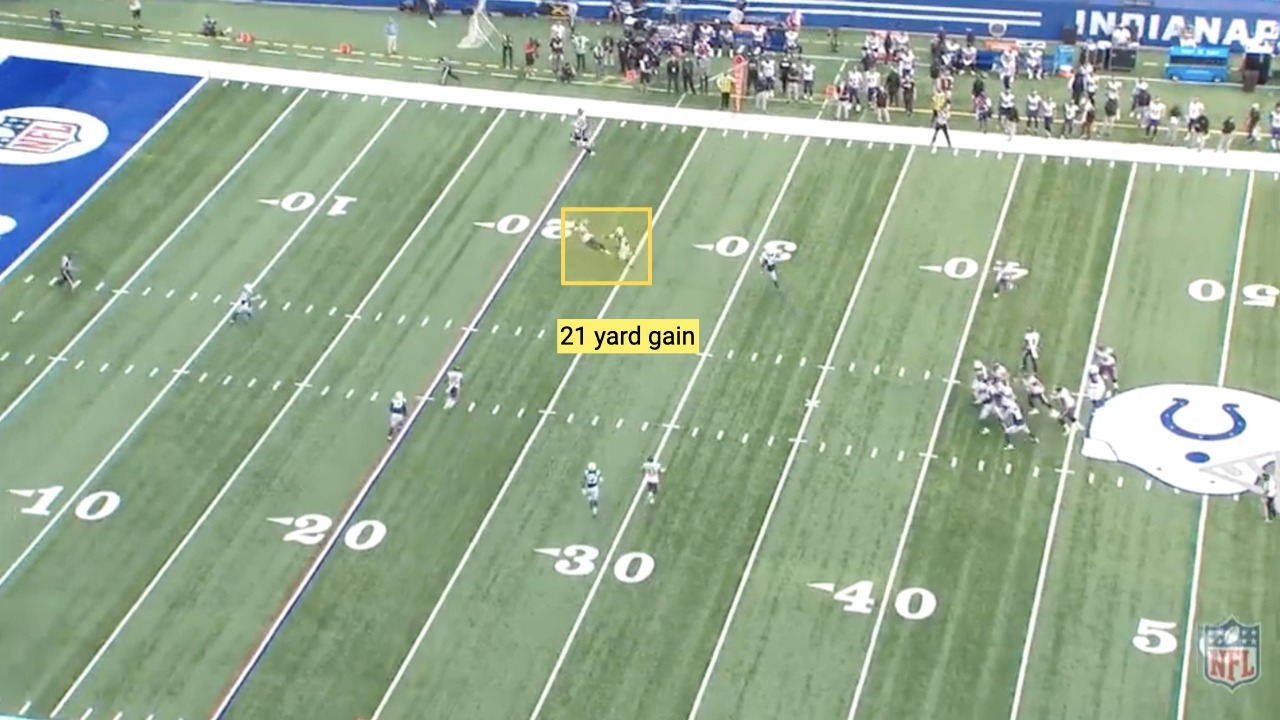 By identifying man coverage, the Titans can look for opportunities to hit mismatches in the passing game, especially with their tight ends against dropping defensive linemen.

The Colts often run man coverage in the red zone. This is an area where Brown and Davis should be able to make plays.

The Titans defense against the Colts needs to force takeaways. The Colts have 9 turnovers in 8 games, including two or more in each of their three losses.

Rivers and the Colts have kept the passing game mostly short and quick. The veteran quarterback is fifth in the NFL in average time to throw, joining Nick Foles and Ben Roethlisberger — two of the Titans recent opponents — in the top five fastest times. The Colts run a lot of swing passes and screens almost as an extension of their struggling running game.

Jonathan Taylor has failed to seize a workhorse role after the injury to Marlon Mack. Jordan Wilkins, a recent practice squad call-up, has earned his way into a three-headed timeshare along with receiving specialist Nyheim Hines.

This three headed monster will carry the rushing workload. By my estimation, Hines is the most talented of the three, but the Colts keep him fresh by rotating in Taylor and, more recently, Wilkins.

The Colts have been using Trey Burton and other tight ends frequently in the red zone. With Jack Doyle out for this game with a concussion, Burton and Mo Alie-Cox may see even more red zone usage than usual.

The Burton wildcat play has become a bit of a red zone staple for Indy when they need a play on offense.

The key is forcing Philip Rivers to make mistakes, usually when under duress or trying to extend a play. He is not afraid to put balls up for grabs and trust his arm more than he should at this age.

The Titans are by far the toughest offense the Colts have faced yet this season. These are the offensive DVOA ranks of the Colts’ opponents this season:

The Vikings, the only other Indianapolis opponent in the top half of offensive DVOA in the league, was not playing like the No. 7 offense back in Week 2. Minnesota was completely inept that game as the Colts won easily.

The Titans have played a number of tough defenses already this year. They should be well prepared to take on the Colts.

The Titans biggest advantage is their use and success with 12 personnel. It’s the Titans’ second-most frequently used formation (behind 11 personnel) and the Colts’ biggest weakness on defense.

With MyCole Pruitt sidelined for this game, expect to get a heavy dose of Jonnu Smith, Anthony Firkser, and Geoff Swaim as the Titans exploit this weakness.

The Colts biggest advantage is their offensive line against the Titans anemic pass rush. Rivers has only been sacked seven times on the season, and while he is old and slow, he’s shown a nice ability to move within the pocket and even make plays on the run (though his accuracy is hit or miss). He’s getting the ball out of his hands quickly and taking advantage of the best pass protection he’s ever played behind.

It’ll be up to the Titans pass rushers, Clowney, Derick Roberson, Jeffery Simmons, and others, to get Rivers off his spot. Containing him in the pocket isn’t as important given his lack of mobility. Forcing him to step forward, and then retracing back or adding pressure from the interior, is how you get to him. The Titans might dial up some blitzes — maybe with Desmond King from the nickel position — to try and affect the quarterback.