Major League Soccer’s Week 11 came and went, and another edition of our Power Rankings is here to break down the action. Week 11 was the last week teams will be at full strength before Gold Cup absences pile up, with most players reporting early this week.

These power rankings aren’t subjective, but use a stats-based model for each team to get a more in-depth look at where clubs actually stand. The model weighs points per game and strength of schedule heavily, and also factors in goal difference and expected goal difference to show not just how teams have done in the table, but how they’ve played on the field.

A few big movers this week, although the majority of the league stays relatively unchanged. DC United jump six spots into 12th after a 7-1 win over Toronto. They’ve played better on the field than their points have reflected to date, but will climb quickly if they keep translating good performances into results.

Toronto, meanwhile, are in freefall. They’ve dropped from 19th to 27th since Week 8, and fired manager Chris Armas (just hired in January). Their 7-1 loss to DC was a shock, but they’ve been playing terribly for a couple weeks now and the writing seemed to be on the wall. They still have loads of talent on the roster; perhaps a manager who implements a system to best utilize the players could turn things around. With 23 matches left to play, there’s still time.

Chicago Fire move out of last place after another good result. Their draw with Philadelphia last week improved their trajectory, and they beat Atlanta 3-0 at home to finally move out of the basement. It’s hard to know just what to make of this Chicago side, but if their DPs perform like they did against Atlanta on a consistent basis, they may push for the playoffs.

Atlanta, meanwhile, are winless in six and are conceding loads of high quality chances. It won’t get easier, with a tough road trip to Nashville midweek.

Nashville move back into the top five after a 1-0 win over Philadelphia. This site obviously focuses heavily on Nashville, but they’re a genuinely fascinating side this season. They’ve conceded plenty of sloppy goals (unlike last year) and struggled to finish chances (like last year), but the advanced metrics show that they’ve actually been quite good on the field.

Their expected goals difference of +9.1 is the third-best in the league, behind only Sporting KC and NYCFC, two of the elite sides in the league over the last several years. xG says they’ve been unlucky/sloppy/both on both sides of the field. If their finishing improves marginally (it should) and they cut out the types of goals they conceded against Cincinnati, Atlanta and New York Red Bulls, this team has the makings of a very good one.

For the first time this season, Seattle have a challenger at the top. Sporting Kansas City has been neck and neck for the second spot in the rankings all season, but move within 0.35 points in the model after a 2-0 win over a really good LA Galaxy side. Meanwhile, Seattle have tailed off a bit, drawing their last two matches against lower ranked sides Vancouver and Colorado.

These projections will change significantly over the course of the season, particularly for teams like Austin FC, who have played just twice at home thus far. And they’re not a concrete attempt to predict the final table, but rather to show each team’s trajectory based on current form. 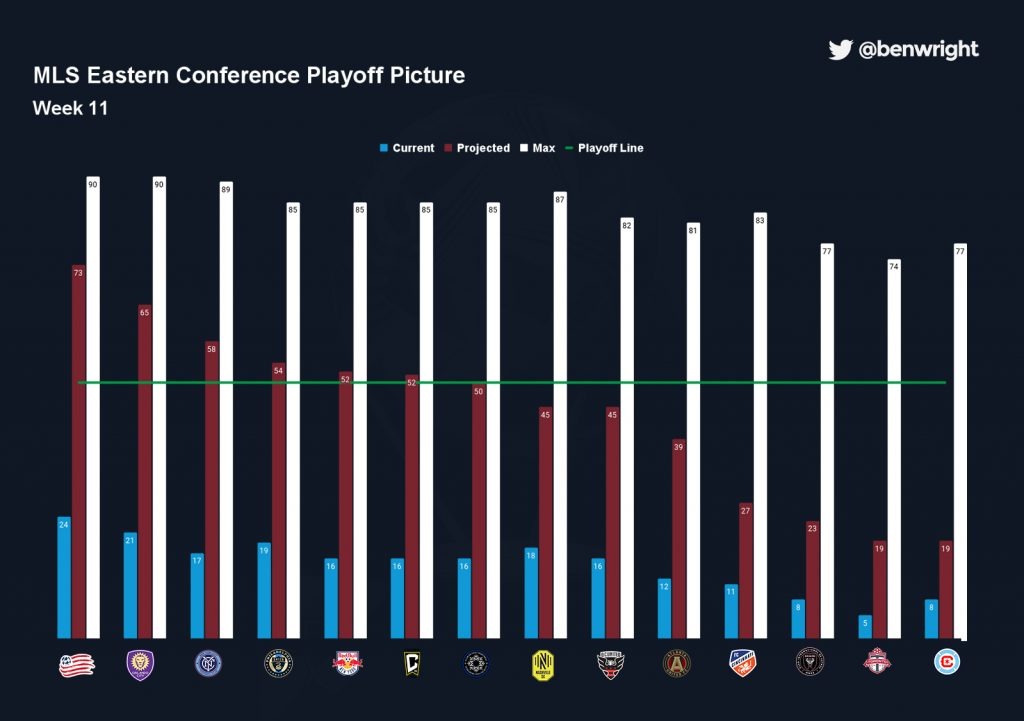 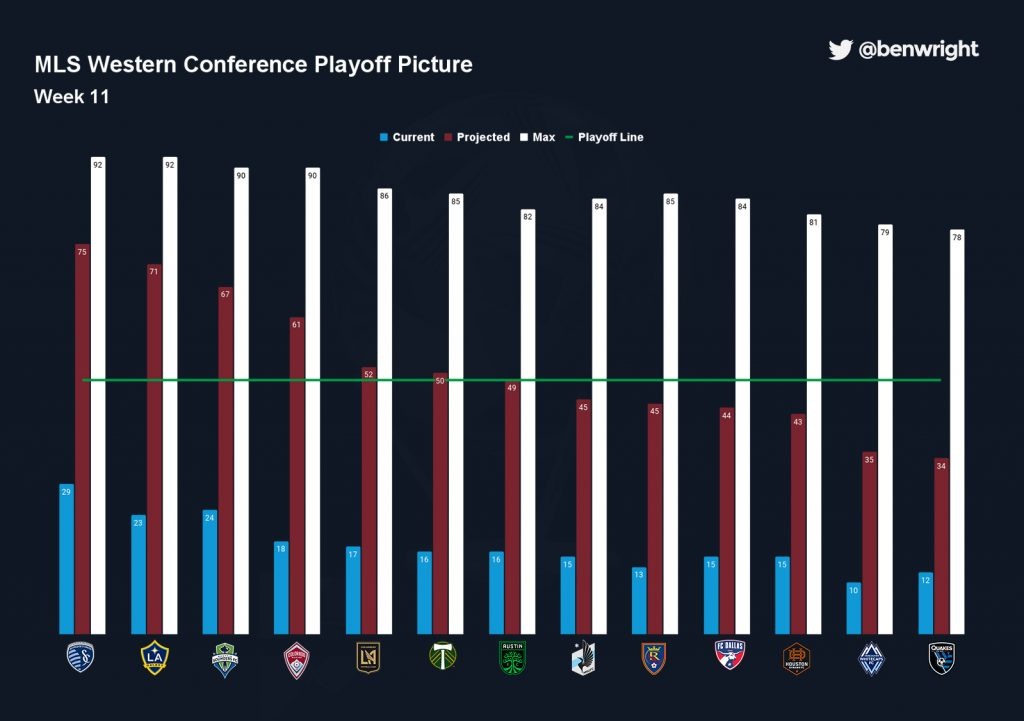 Nashville still fall outside of the playoffs in this model. They’re performing above the league average at home, but have played roughly 50% of their home matches for the season so far. However, they’re averaging just 0.67 points per game on the road, and still have 14 away matches left to play, which is where the model kills them. If they improve their road PPG even slightly, they’ll jump up in the projections rather quickly.

We’ll be back after next week’s action with more breakdowns. Shout out to American Soccer Analysis for their informative and free(!!) data.