Conversations with Moore’s previous club, CD Tenerife, date back to the winter. Nashville reportedly sought to obtain Moore prior to the start of the 2022 season, but Tenerife would not finalize a transfer amid a push for promotion out of Spain’s second division.

Nashville’s front office has openly discussed upgrading the right-back position since the trade of Alistair Johnston to CF Montréal. From the outside looking in, Moore has been the primary target to replace Johnston from the beginning.

Moore, a native of the South, hails from nearby Powder Springs, Georgia, a prominent Atlanta suburb. As he told our friends at Dirty South Soccer in a 2018 interview:

“My family still lives in Powder Springs, so I try and go back there most holidays. I have a lot of roots back there, so it’s always good to go back.

As a teenager, Moore spent a year at the IMG Academy and another with the FC Dallas academy before making the leap to join Huracán in the Spanish third division. He next joined Real Oviedo’s B team before signing with Levante. Moore primarily featured for Levante’s reserves but did make a few appearances for the senior club in La Liga.

Ultimately, Moore landed with Tenerife where he became a regular starter for Los Blanquiazules. However, Moore lost his starting role last season. He had been permitted to take an extended summer break on the heels of having participated in the Gold Cup with the U.S. Men’s National Team. That absence allowed Jérémy Mellot, a relatively unheralded signing, to impress the coaching staff. Mellot seized the starting role at right back and never relinquished control. As a result, Moore’s playing time became sporadic, and he sought a move elsewhere in January. Reports heavily linked Moore to Nashville but the move never materialized. Moore languished on Tenerife’s bench for much of the spring before playing an outsized role in the final month of the season. He played outstandingly in Tenerife’s final two regular-season matches which featured heavy rotation. In the first leg of the promotion playoff, Manager Luis Miguel Ramis shifted Mellot to play inverted at left back in order to facilitate Moore’s inclusion into the starting XI. Moore rewarded Ramis’ faith in him by delivering highly acclaimed performances. However, Tenerife’s promotion bid fell just short having lost at home to Girona in the final leg.

Moore’s stellar play created additional interest this summer. Montpellier HSC and Watford were both linked with Moore a few weeks prior in addition to unnamed interest from lower-level La Liga sides. Ultimately, Nashville won the race for Moore’s signature as playing time is vitally important as he seeks to force his way into Gregg Berhalter’s selection for the World Cup.

A natural right back with elite-level skills

Like his USMNT teammate DeAndre Yedlin has shown this season for Inter Miami, Moore should enter MLS as one of the top right backs in the league.

Moore is a natural right back with the ability to play further up the pitch. Offensively, he is as accurate of a crosser as you will find in MLS. His crossing accuracy rate of 38% would outrank almost all MLS players this season and is a significant upgrade from Nashville’s current crop of players; Hany Mukhtar (31%), Alex Muyl (29%), and Daniel Lovitz (16%).

Moore also adds offensive value as a late runner in the box. This attribute was highlighted most by his 1’ minute goal against Canada in the 2021 Gold Cup. For Nashville, Alex Muyl has created dangerous opportunities in similar situations this season. Having a fullback / wingback that will make back-post runs adds a valuable element to the attack.

While Moore excels offensively, he is an equally adept defender. He shows natural instincts to locate the danger and react quickly to snuff it out.

Overall, Moore’s skill set instantly upgrades Nashville’s roster. It is not every day that you are able to acquire a U.S. National Team contributor.

How Moore will change Nashville on the field

Moore should quickly find himself inserted into the starting lineup, even if it can be tough to break into Gary Smith’s preferred group.

Alex Muyl and Eric Miller have valiantly served Nashville to fill the void left by Alistair Johnston’s departure. But both have their limitations. Any regular reader of my Three Thoughts columns will have noticed the trend of Muyl struggling defensively when Nashville is pinned deep. It is no knock on Muyl. He is an attacking player who has been asked to play an entirely new position. As for Miller, he is a steady defensive force but adds little to the attack. His best position is as an RCB as part of a back three. Moore’s skillset combines some of the strengths of each player while adding his own wrinkle to the position.

Moore puts in a shift on both sides of the ball and has the engine to overlap in attack and still stay in position defensively. He's an elite crosser of the ball, and has a knack for making late runs into the box. He'll bring a different dynamic to Nashville.

Tactically, Moore gives Nashville considerable flexibility. As a natural fullback, Smith can transition back into a four-defender shape. We have seen a four-man backline at times this season, including last Wednesday against Seattle. Moore’s elite offensive traits also provide a perfect fit in the wingback role when Nashville plays its more customary 3-4-1-2 formation. This versatility will give Gary Smith options to adjust the game plan based on the opponent’s relative strengths and weaknesses.

When Nashville does switch to a four-man backline, it means Nashville can insert either an additional midfielder or attacker. Here, are two potential options. 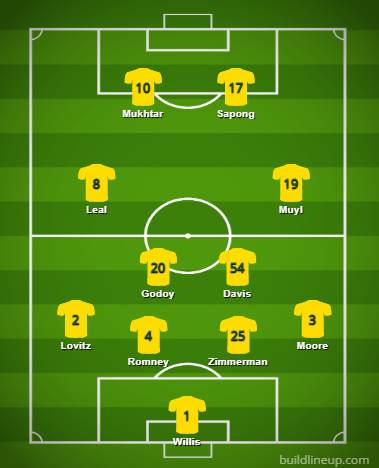 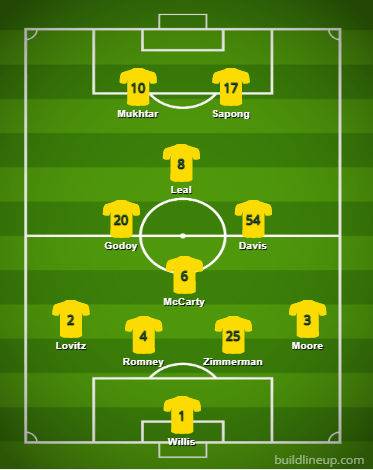 Unfortunately for some Nashville fans, I do not think Moore’s addition will be the impetus for Aké Loba’s inclusion into the starting XI. What is most important to Gary Smith is Nashville’s defensive structure. When sitting back, Nashville often appears with two blocks of four defenders with the two forwards ahead of them. It is by no means a static setup. There is constant movement from Nashville’s defenders. At times, it morphs temporarily into a 5-3-2, 4-3-3, 4-2-2, and everything in between. As the ball moves, it triggers particular defenders to step and slide as a cohesive unit.

But it is best to think of the various defensive roles emanating from a 4-4-2. Since joining the Coyotes, Loba has never operated anywhere other than as one of those most forward defenders. I don’t see that changing anytime soon. So unless he can unseat Mukhtar or Sapong as the entrenched starters, his playing time will remain limited.

It may sound oxymoronic, but the biggest benefactor of Moore’s arrival may be Alex Muyl. A switch to a four-man backline will push Muyl into his more natural position further up the pitch. He may not always be a starter, but last season Muyl was usually one of Gary Smith’s first substitutions off the bench. He featured in 32 matches and made 16 starts. With Muyl’s Swiss-army-knife versatility, Muyl will resume his role as Nashville’s most important depth piece across multiple positions.

Shaq Moore’s inclusion provides Nashville with multiple options to tinker with its tactical approach. It will be fascinating to watch over the coming weeks.

How Moore impacts the roster budget

The Shaq Moore transfer stands as one of the most significant investments in Nashville SC’s history. On price tag alone, the reported $2 million-dollar transfer fee trails only Mukhtar and Loba.

Let’s walk through the budget math. For the sake of our discussion, I am going to assume Moore’s salary will come in around $812,500 per year. I chose this number to make our budget example a little easier to digest. But this guaranteed compensation rate would make him one of the highest-paid fullbacks/wingbacks in MLS, trailing only Julian Gressel (VAN), DeAndre Yedlin (MIA), and Romain Métanire (MIN).

Budget charge is not just a player’s salary. It also includes any amount of acquisition costs paid during that year (ie. transfer or loan fees). Nashville will need to buy down the impact of both Moore’s salary and transfer fee in order to remain roster compliant.

Nashville is unable to accomplish this in just one year. The Maximum Targeted Allocation Money threshold is $1,612,500. If a player’s budget charge in a given year is above this threshold, he has to be made a DP. With Moore making $812,500 as our projected salary, Nashville can only afford to pay a maximum of $800,000 per year toward his transfer fee. To fit Moore under the Maximum Target Allocation Money threshold, Nashville will need to have reached an agreement with CD Tenerife to stretch the payments across three years using our numbers.

In our example, Nashville will need to spend a significant amount of Allocation Money to clear Moore’s transfer fee over the next three years.

This of course is just a rough illustration. The numbers from our assumptions are assuredly incorrect and will be much more dynamic. We also know that with the Collective Bargaining Agreement framework ratified by the MLS Players’ Association and the league last year, the Maximum Budget Charge and Maximum Targeted Allocation Money threshold will rise over the coming years.

Regardless of the final numbers, Nashville is making a significant bet that Moore will become a key contributor to the club.

Shaq Moore’s arrival will be much celebrated. Moore has been the source of much discussion and transfer rumors for the last six months. But the transfer window remains open. It is all but guaranteed that Nashville will make a couple of additional moves over the coming days. We will be here to break down each roster move as they are made.